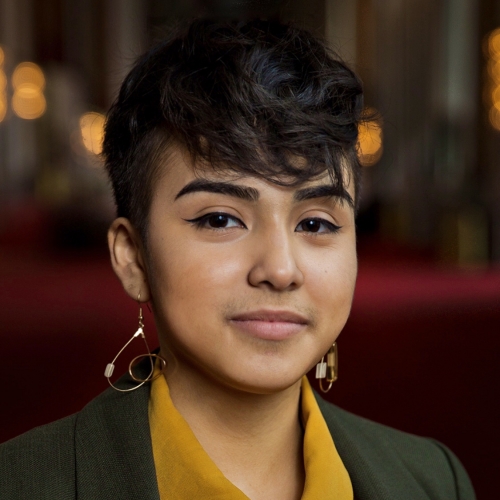 Tyler Econa is a nonbinary writer, artist and poet. Their identity informs their work, circling themes of culture, disability, queer love and loss. Hailing from suburban Washington, D.C., Econa’s passion for all forms of art ignited in high school, where they published their first few projects of award-winning playwriting, poetry and prose. Their work has been featured by numerous organizations such as the Kennedy Center, the Scholastic Art and Writing awards, Writopia Lab and more. Tyler’s work has also appeared in publications such as Susquehanna University’s Apprentice Writer, Ann Arbor District Library, Polyphony Lit Mag, Scholastic’s Best Teen Writing as well as UArts’ own Underground Pool. In their spare time, Econa paints digitally as well as traditionally, and freelances commissions.

"I think television is a conversation. The stories we give voices to are the ones we feel for, learn from and pay attention to. I’ve lived my life having to write myself in. I strive to be a voice for those of us who don’t see themselves on screen—not to represent, but to engage, starting conversations that the industry isn’t yet bold enough to take on."