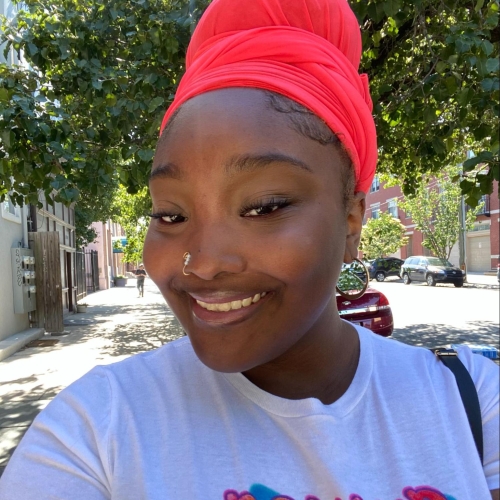 Haley Joyner was born and raised in Philadelphia, PA. Ever since she was the age of 4, she has loved music. Haley particularly enjoyed old-school songs that her parents would play. She admired/ still admires artists such as Nina Simone, Billie Holiday, Stevie Wonder, Erykah Badu, Jill Scott, and countless other old-school icons. What gravitated her to these specific artists were the uniqueness in their voices, the emotion and obvious effort that they put into each and everyone of their songs, and the use of instrumentation in each of their songs. These were qualities that she either found similar to herself or that she aspired to incorporate into her own artistry. She attended Franklin Learning Center high school as a Vocal Performance Major and Musical Theatre minor. Haley has attended the Philadelphia Clef Club of Jazz and Performing Arts from 2017-2022 where she received vocal lessons and some theory classes.Haley’s favorite genres of music are jazz, neo-soul, R&B and classical, but she appreciates and is open to learning all genres as well as music in different languages. Haley’s future goals are to travel the world, creating and teaching music that inspire others to be the best versions of themselves and that promotes /advocates for positive change in the world.

Be authentically and unapologetically yourself.. and let your light shine in every room you enter!

Haley has performed at many venues around the Philadelphia area such as The Philadelphia Clef Club, The View, La Rose Cafe, South Jazz Restaurant, The African American Museum, The Kimmel Center, etc.