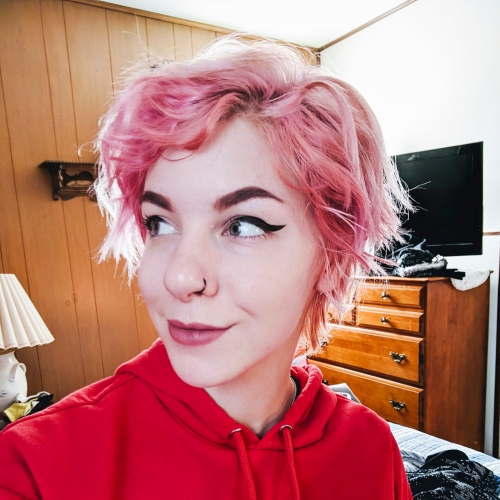 I am so excited to attend my first GDC, the Independent Games Festival awards ceremony, make more connections and learn more.

My name is Danielle Vuono and I am a Game Art major at the University of the Arts. I began college at Maryland Institute College of Art for animation, then transferred to Alberta College of Art and Design in Canada for illustration. Finally, I decided to return to my roots in Philadelphia and transfer to The University of the Arts. Originally I attended for illustration, but after a semester I changed my major to Game Art to fulfill my need to create a more interactive and personal experience with my art. Before attending the University of the Arts, I interned at 15lb Pink Productions creating special effects for a National Film Board of Canada short film called Skin for Skin.

Once I changed my major to Game Art, I heard about a community called Philly Game Mechanics. Philly Game Mechanics is a community full of game developers, writers, artist, musicians, etc. who all share a love for games and making them. I attended game jams and events and made a bunch of friends and connections which led me to my current job with Gossamer Games. I think it is safe to say meeting my boss Tom Sharpe was one of the most important moments of my young adult life and my career as a game artist. I got an interview with Tom and almost immediately started working on Sole. It has been a little over a year now that I have been working for Gossamer Games and my life has changed dramatically. I never thought I would be a part of such an amazing team of people and be nominated for best student game at the Independent Games Festival 2019 where well-known games such as Night in the Woods and Celeste have been recognized.

Since working at Gossamer Games, I have gotten to attend MAGFest two times, showcased on the IMAX screen at the Franklin Institute, and will be attending PAX East in Boston this March as well as the Game Developers Conference in San Francisco. I have learned an enormous amount through all these events and now have a community to turn to for support with my own art endeavors including my 360 3D-animated film for my senior thesis. I could not be more thankful. I am so excited to attend my first GDC, the Independent Games Festival awards ceremony, make more connections and learn more.