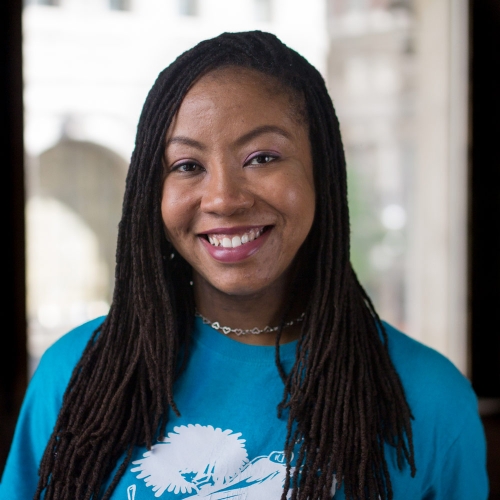 Dinita Clark is a native of Philadelphia, PA. She earned her Bachelor Of Fine Arts from The University Of The Arts in 2005. She dedicated over 15 years to Hip Hop/Street dance culture as a professional dancer/performer, educator, mentor, choreographer, community leader and cultural ambassador of street dance. She has toured both nationally and internationally as a Principal dancer with Illstyle & Peace Productions from 2002-2007. She then joined Rennie Harris Puremovement from 2007-2014 serving as principal/assistant Rehearsal Dir. Dinita was featured in Dance Magazine “On The Rise” written Lisa Kraus, highlighting her artistic journey as performing artist. Locally, Dinita is an adjunct professor at The University of the Arts and Drexel University. She has also taught at Bryn Mawr College, Temple University and has set choreography for each University/ College. In 2010, she co-founded Just Sole! Street Dance Theater Company, followed in 2011 by “Funky Sole Fundamentals,” a bi-monthly workshop series dedicated to the preservation of Hip Hop, House, and Funk Styles dance. Dinita has performed and taught internationally in Poland, Mexico, UK, Amsterdam, Canada, Paris, Egypt, Israel, Palestine, Kyrgyz Republic & Kazakhstan. Dinita has represented the USA as a Cultural Ambassador twice. She has taught at dance Festivals including The 13th Contemporary Dance Festival in Bytom, Barriquismo Festival Puebla Mexico, City Lights Festival in New Castle England, Bates Dance Festival, Illadelph Legends Festival and Ladies Of Hip Hop to name a few. Dinita has also judged and won national and international street dance competitions including “Freestyle Session/ Survival of the Illest” and “Juste Debout USA”. Dinita was the assistant to the choreographer Kyle “JustSole” Clark in his work for Alvin Ailey II entitled “I Am the Road”. With funding provided of the Pew Center for the Arts & heritage in 2016 for Kyle Clark’s “The Life Of A Just Sole”, Dinita was the Administrative Assistant, Co-Choreographer, Outreach coordinator, and Master class educator. Dinita “Princess Di” is the recipient of the 2017 Leeway Transformation Award.