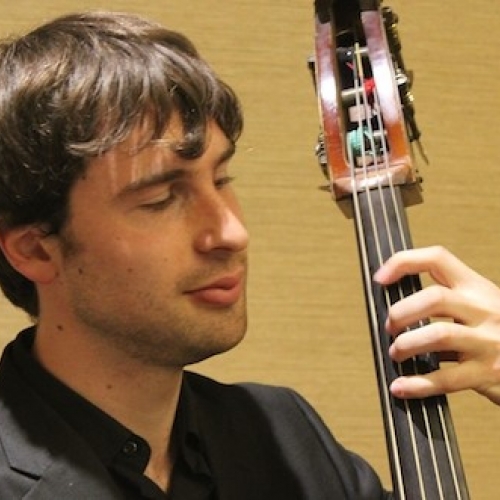 When I moved to Philadelphia, I felt that I found the epicenter of what I was looking for: the luxury of studying with my heroes and being surrounded by so many talented musicians, each with their own unique sounds.

Alex is a member of the nationally-recognized "Z" Big Band, performing with the ensemble when it took first place at the prestigious Monterey Next Generation Jazz Festival last spring.

Born in Versailles, France, Delcourt started studying bass when he was 14 years old, but music has always sparked his curiosity. He fondly remembers receiving his first radio from his parents: "I couldn’t stop messing around with the bass boost button. I could feel the bass vibrations on the walls and in my body. It felt amazing."

While in Paris, at the age of 18, he began to pursue a music degree, studying at the American School of Modern Music, and taking weekly Skype lessons with Philadelphia-based bass player Steve Beskrone.

At the end of 2013, in order to expand his musical skills and get closer to the origins of American music, he moved to Philadelphia. He completed an exchange program and then continued on as a full-time student at the University of the Arts.

In the spring of 2017, Alex was honored at the third annual Catherine R. and Anthony A. Clifton Foundation Emerging Artists Awards. The event was held at the Kimmel Center for the Performing Arts' Perelman Theater, and spotlighted five exceptional young music students, each of whom received a $5,000 tuition award.