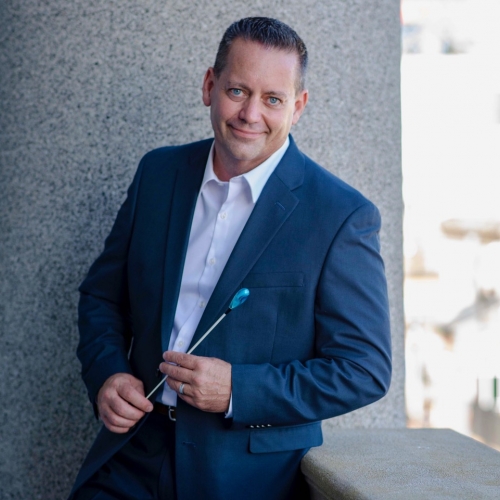 Keith W. Hodgson is an assistant professor of Music Education at the University of The Arts in Philadelphia, PA. He teaches Graduate Conducting, Undergraduate Conducting and Percussion Methods.

Mr. Hodgson currently serves as president to the Eastern Division of the National Association for Music Education, is a past-president of the New Jersey Music Educator's Association and a National Board Certified Teacher. He was the recipient of the 2014 New Jersey Governor's Award in the Arts for Leadership in Music and was a Grammy Award-nominated quarterfinalist for the Music Educator Award in 2014. Mr. Hodgson holds a bachelor’s degree in Music Education from William Patterson University, NJ; and his master’s degree in School Leadership and Administration with Supervisor and Principal certifications from Rowan University, NJ. Mr. Hodgson’s teaching career includes 26 years as a high school band director in New Jersey, the majority of which he served as director of Instrumental Music at Mainland Regional HS in Linwood. His experience with concert, jazz, marching, orchestra and chamber ensembles is extensive.

Mr. Hodgson is the conductor and music director for the South Jersey Area Wind Ensemble, an adult community band of music educators and professional musicians. He has held the principal conducting post of the SJAWE since its founding in 1997. Mr. Hodgson is also the head director of the American Music Abroad Gold Tour, an annual three-week summer music tour of band, choral and orchestra students performing in six countries throughout Europe. He has over 20 years of experience in group travel and performing for European audiences in Austria, Belgium, Croatia, Czech Republic, France, Germany, Holland, Hungary, Italy, Luxembourg, Slovenia and Switzerland.

Mr. Hodgson is an active guest conductor for high school honor bands, community bands and summer music camps as well as a band and orchestra clinician, guest speaker and professional development presenter. He annually presents at numerous state, regional and national conferences. In 2007, he presented at the prestigious Midwest Clinic in Chicago on the music certificate for the National Board of Professional Teaching Standards. As a conductor, he has studied with many master conductors/teachers including Edward Lisk, Stephen Melillo, Anthony Maiello and Mallory Thompson, among others. His guest conducting appearances have included honors ensembles in NJ, CT, MD, NY, PA, AK, AL and Europe.

Mr. Hodgson is proud to be a Conn-Selmer educational clinician, an educational consultant for Zeswitz Music and an adjunct professor at Stockton University in Galloway, NJ. He was honored as the recipient of the 2016 Distinguished Service Award by the New Jersey Music Educators Association. He is also a WorldStrides Heritage Festivals adjudicator and a contributor to a new edition of a GIA Band Curriculum Guide by the American School Band Directors Association.