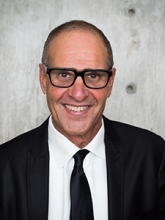 University of the Arts Board of Trustees Chairman Jeffrey A. Lutsky announced today that the board has voted unanimously to appoint David Yager as the university’s next president. Yager will join the 139-year-old Philadelphia institution from the University of California, Santa Cruz (UC Santa Cruz), where he currently serves as dean of the Arts Division, distinguished professor of art, and an affiliated faculty member of the Digital Arts and New Media program. Yager will begin his tenure at UArts on January 15, 2016.

“We are delighted that David will be joining UArts to lead this unique and dynamic institution into the future,” said Lutsky. “He has a deep and personal understanding of the importance of an arts education that emphasizes innovation and develops creative leaders.”

An accomplished visual artist, Yager also has an extensive background as an artist, an academic, a researcher utilizing design to improve the health care space, an entrepreneur and a business executive.

“David is well equipped to enhance UArts’ position as the only private university in the nation that expands lives by connecting the performing, visual and communication arts in both the classroom and the community,” added Lutsky. “We’re confident that his vision, experience and leadership will strengthen the university and further expand its reputation as an innovative leader. We look forward to welcoming him to Philadelphia.”

"I am excited to join this innovative university as its next president,” Yager said. "My own experience across the areas of visual art, design, performing arts, academia, corporate and health care industries mirrors UArts’ focus on developing creative young leaders with the potential to influence an almost unlimited number of fields. I am looking forward to helping to shape the university’s future and to raising its profile as we enter this new chapter in its history together. I’m especially looking forward to working with UArts’ high quality faculty, students and scholars.”

Yager joined UC Santa Cruz as dean of the Arts Division in 2009. During his tenure, he created multiple graduate programs, including two doctoral programs and two master’s programs, as well as a number of new majors including an undergraduate major in gaming and playable media.

“We congratulate David on being named UArts’ new president,” said George Blumenthal, chancellor at UC Santa Cruz. “We will miss his passion, vision and drive as dean of the Arts Division at UC Santa Cruz and wish him all the best in his new position. UArts will be very well served.”

Before joining UC Santa Cruz, Yager spent 23 years at University of Maryland, Baltimore County (UMBC) where he was a distinguished professor and Wilson Elkins Professor of Visual Art, founder and director of the Imaging Research Center (IRC), founder and director of the Center for Art, Design and Visual Culture (CADVC), and founder and director of the Innovation and Design Lab (IDL). Yager brought the IDL concept with him to California where he founded UC Santa Cruz’s Innovation and Design Lab (IDL). Under his direction, the goal of IDL is to create new knowledge in the health and wellness industries through a holistic approach to innovation and design research that generates products, tools, services and solutions to improve health outcomes. The lab’s primary research focus is based at the Children’s Center and the Department of Pediatrics at the Johns Hopkins Medical Institutions, where Yager holds a faculty position in pediatrics.

In 1999, during his tenure at UMBC, Yager became vice president of research and later president of a division of a publicly traded technology company. His clients included GlaxoSmithKline, John Deere, Daimler Chrysler, Toyota, Cisco, Pharmacia and other Fortune 100 companies. Previously, Yager served as chair of the department of Art and Art History at the University of South Florida and director of its nationally acclaimed Graphicstudio, which collaborated with artists such as Robert Rauschenberg, Jim Dine, Robert Mapplethorpe and Vito Acconci, to name a few.

Yager’s art training began with painting, printmaking, photography, film and video. A noted photographer and designer, his work has been exhibited nationally and internationally. His work ultimately transitioned to digital and imaging technologies, visualization, animation and simulation – the precursors to his current work in digital imaging and health care design that responds to current culture and cultural trends. Yager earned a Bachelor of Arts from the University of Connecticut, a Master of Fine Arts from Florida State University and an honorary doctorate in design from De Montfort University in Leicester, England.

Yager will serve as the fourth president since UArts received university status in 1987, succeeding Sean Buffington, who stepped down in January to become a vice president with the Henry Luce Foundation in New York City.

His wife of 15 years, Stacey Wills Yager, a native Philadelphian and seasoned health care professional, spent the past 25 years designing strategies that support commercial development in the pharmaceutical, biotech and medical device industries. A proud alumna of Abington Friends School, Dr. Yager earned her Bachelor of Arts from Mt. Holyoke College, a master’s degree in public health from Yale University and a doctorate in public health from Johns Hopkins University.