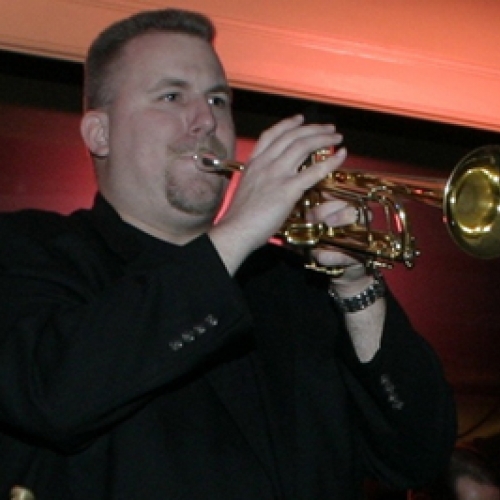 "Why not us?" That’s what Matt Gallagher MM ’01 (Jazz Studies), assistant professor, and director of the UArts "Z" Big Band hoped the band members would be thinking as they headed for California in April to compete in the 46th Annual Next Generation Jazz Festival. The event is sponsored by the Monterey Jazz Festival, the longest running, most prestigious festival of its kind in the world. There was a lot at stake. The winners would take the stage at Monterey in September. This year was only the "Z" Band’s second invitation to the Next Generation competition (they didn’t place last year), and Matt wasn’t sure what to expect. But on the heels of recent successes—in 2016, the band was named one of the nation’s Top College Large Jazz Ensembles by Downbeat magazine for the second year in a row—he thought it was worth a shot.

And he was right. "Why not us?" became "Yes, us!" when the band tied for first place in the Big Band category with the University of Nevada, Las Vegas. Band members also took home three of the five "Outstanding Soloist" awards. "Everybody knows about the big state schools. Now they know what a good thing we've got going on here, too," he says of the win.

He’s proud of the band’s accomplishments, but "it’s not about me, it’s about them," he insists. His job, he says, is something like that of a baseball coach. "I set the lineup, but they have to go in and make the hits. It’s all up to them." He has been especially impressed with the way the band, which includes three freshmen and three sophomores, has come together as an ensemble and a community. "They support each other and cheer each other on. They’re 19 really different guys who see past their differences and have created something special together."

Matt knows from personal experience what it takes to perform at the top of your game both as member of an ensemble and as a featured lead player. One of the most sought-after trumpet players on the East Coast, he has performed with such world-class organizations as The Philadelphia Orchestra and The Boston Symphony Orchestra; appeared with Aretha Franklin and  Diana Krall, among many others; recorded with Céline Dion, Jennifer Lopez and Jennifer Hudson; and performs regularly with the Philly POPS. As a performer, he is recognized for his unique ability to blend and bend genres, moving fluidly among classical, jazz and pop interpretations. He brings that same openness about form and style to his teaching. "We don’t look for a particular type of student with a narrowly-defined set of skills. We look for talent and passion, and for students who can’t live without playing music." As for his own lifelong engagement with music, Matt says "I didn’t choose music, music chose me."

As a teacher, he is enthusiastic about the sheer range of possibilities for artists of all kinds in Philadelphia. He tells his students: "As a creative person, you can do almost anything; but you have to seek out the opportunities and go after what you want." Not unlike a "big band" from a small school in Center City Philadelphia making its way to Monterey to take top honors and "put us on the map."