On a sunny Wednesday afternoon, UArts sat down with Jeannine A. Cook BS ’04 (Communications and Media Studies), MA ’14 (Art Education) as she prepared for the opening of her new bookshop, Harriett’s, in a bustling section of Fishtown, a quick walk from the Girard subway stop. Just inside the entrance, there is a shelf holding books related to the shop’s namesake, Harriet Tubman, who Cook tells us “is probably one of the most iconic heroines that we will ever know.”

Tubman’s influence in the store is clear: The shelves are lined with books by prominent black women authors—like Such a Fun Age by Kiley Reid—and a copy of Alice Walker’s The Color Purple that rests atop a table where Cook sits. The shop has had its soft opening and has already been visited by members of the community.

We asked Cook about how her time at UArts influenced her decision to open Harriett’s. Cook said that as a senior in high school, she visited the university with a friend and met with the program director of the Communications and Media Studies program. It focused on using communication for social activism, something that appealed to Cook and now characterizes the mission of her bookshop. “Art is used to inform the way people see the world—the way they see themselves,” she commented. “It wasn’t what I was expecting to happen in my story.”

The constant collaboration she experienced at UArts stayed with her throughout her career. “Being in an art environment, even though I was studying media and communications, meant that I learned drawing, learned about shape and form and function, [and] the typical media and communications kind of stuff.” Cook still utilizes this interdisciplinary approach in her shop by collaborating with artists in the community. Artwork by Karoline Yesterdaye lines the walls of the store, and in addition to her artwork, Yesterdaye donated books to Harriett’s.

Cook also spoke candidly about the challenges she overcame while at UArts, and how they impacted her mission to bring art to the community. During her first year, Cook found out that she was pregnant and initially believed that she would have to drop out of school. She said that the mentorship from her digital journalism professor changed everything. He said, “You know, you’re an artist, and artists create their own paths.” Cook said that that concept was new to her, but she internalized it and decided to continue toward her degree and eventually become a business owner.

“Art is used to inform the way people see the world

—the way they see themselves" 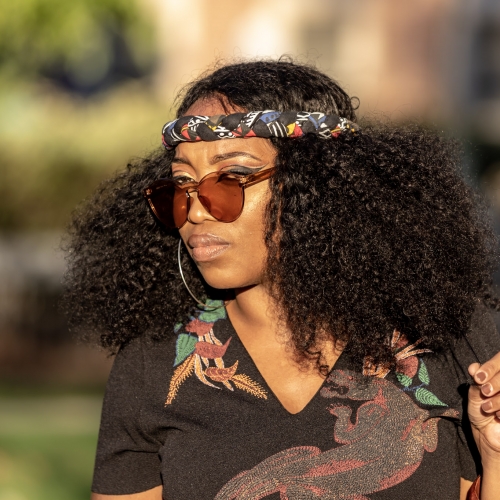 Cook’s son was born in July, and she started classes in late August that year. She took him to class every day and said that to this day, university staff still ask about him. Cook also shared her experiences struggling with homelessness. Her mentors and resources at UArts were essential to working through that difficult time. “My professors were not only integral [to] my education, but [to] the raising of my son, because they saw that this was my scenario and said, ‘If she’s willing to do this, then I’m willing to support her.’ That’s genuinely the UArts experience,” Cook said. She was later awarded the David Brown Scholarship, which helped her finish her degree.

While at UArts, Cook also started Positive Minds, a club that would influence her social activism throughout her career. “I wanted to know what would happen if you brought art directly to children,” Cook said. Every day when Cook returned home to her neighborhood carrying art supplies, she began asking the kids what they would do with the materials. Cook and the kids ended up working on art projects together.  She saw how the project united the community and the power that art had on the world around her. When Positive Minds began at UArts, the club started raising money by selling books outside of Hamilton Hall, an experience that has now come full circle with Harriett’s opening. “Life is funny in how we continue to be up to the same mission even when we’re younger,” Cook said.

That mission led Cook back to UArts to the Corzo Center for Creative Economy, where she met with Neil Kleinman to discuss the idea for Harriett’s. The two sat together “for hours,” as Cook took notes that she would later use to make her ideas a reality. “I can always go back [to UArts] and say, ‘This is where I am now,’ and folks will support where I want to go next,” she said.

Harriett’s celebrates its opening on Feb. 1, the first day of Black History Month and the month of lauded literary superstar Toni Morrison’s birthday. The opening is a free, all-day event with performances starting at 10 a.m. and lasting until 6 p.m.