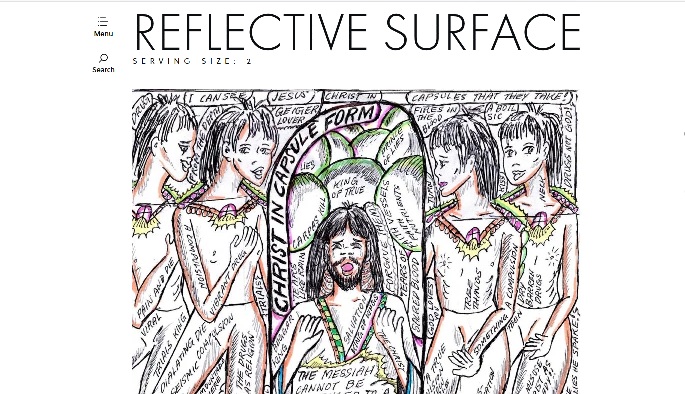 Phase 1
The first phase of our funding was split up evenly between purchasing business cards for 2/3 of the writers and launching our first sponsored Facebook ad. There were a number of reasons that I (and the rest of the Reflective Surface team) felt this was the most prudent course of action for our first round of funding. Many of our writers had been contacted at the shows they played or just out and about from people who wanted their music covered by Reflective Surface, and our writers had no physical media to present them. The business cards engage our audience directly, as well as help legitimize the brand in terms of making connections.

The Facebook ad was a way to strengthen our online presence a little more, and hopefully gain new likes as a means to reaching new audiences and opportunities. The results were about as positive as we could’ve hoped for in a 14- week period with a $70 budget. The ad reached 1,871 people, and though it only got 12 post engagements, we got an extra 20 likes. That’s certainly not as many as I would’ve liked from our first outing, and I’ve reached out to friends who have had better luck with sponsored Facebook posts. They’re advice was to narrow down the targeted community as much as possible, and to promote a specific review on the site instead of the Facebook page itself. I was told that would drive more traffic to the site, which would lead to more organic likes to the social media pages.

Phase 2
This past round of funding was focused primarily on the printing and distribution of stickers as physical advertising, and the development of an Instagram ad campaign. A small amount of the funding also went to printing the last set of business cards for our latest writer and new editor. These campaigns were helpful in increasing brand awareness, but didn’t really help our metrics overall. The Instagram campaign was found to be a bit of a non-starter, overall. We distributed a post that featured the site’s logo with our typical, brief description of what we do. The ad ran for 10 days and only received 18 engagements, only giving us 4 new followers. This has raised an interesting problem for us, as our business could thrive on Instagram markets. Many other similar publications (Cherry-Veen Zine, The Key) thrive via Instagram, though I don’t see any marketing from them. The question then becomes how to achieve success in that market organically, as the sponsored post was ruled generally unsuccessful.

The stickers themselves gave us a much wider audience, upon initial distribution we noticed a serious uptick in our readership. Two days after they were distributed, our site received over 100 hits despite no content being posted or shared around that day. They took a long time to print, but we’re still receiving many of the benefits.

Phase 3
Our final round of funding will be continued experimentation with social media marketing. We have been able to learn thus far a little bit about what does and does not work, and we’re excited to try out some new techniques, such as sharing specific articles rather than just the site or the Facebook page. This, along with the fact that we’re starting to cover news very soon, we believe will increase traffic to the site and our social media pages.