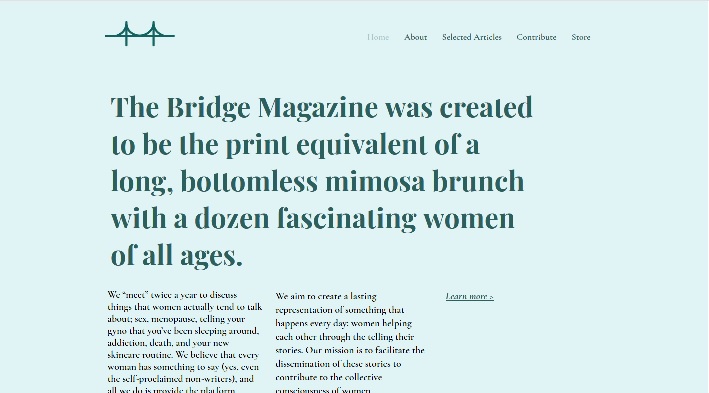 The Bridge magazine was created to be the print equivalent of a long, bottomless mimosa brunch with a dozen fascinating women of all ages. We “meet” twice a year to discuss things that women actually tend to talk about; sex, menopause, telling your gyno that you’ve been sleeping around, addiction, how to make vegetables less disgusting, and your new skincare routine.

The Bridge was founded by Aubrey Fink, UArts Graphic Design '19.

Phase 1
For Phase 1 of the Corzo/TD Marketing Grant, I had three main goals. The first was to develop a sample booklet that pulled highlights from the first two issues to send to potential advertisers and retail partners. The second was to develop a media kit to send to potential advertisers. The third was to reach out to ad and retail partners in hopes of making connections.

I was able to design and print 30 sample booklets, many of which I’ve already distributed to potential partners. I also created a media kit that explains the mission of the magazine, the demographics of our audience, and details ad options and pricing. Since then, I’ve reached out to potential advertisers, securing 5 partnerships so far. My goal was to raise $500 through ad partnerships and I am currently at $375. I’ve also found 2 retail partners in the city.

Through this process, I learned that there are two main groups I’m trying to connect with. The first is women who own small businesses. These women look at this opportunity more as a way to support the project than to necessarily advertise (though it certainly can’t hurt). I tested my messaging and found it successful in securing the partners I reached out to. The second group is more corporate partners who are looking to support creative projects in Philadelphia. Because I was trying to appeal to two different groups, I created two slightly different packets. The first appeals to the small business owners and the second targets corporate partnerships. I rearranged the content to what I think would be most important to each group as well as slightly altering the text. For both, I tried to let the tone of the magazine bleed into the messaging of the media kit because I find that people like the more casual and fun language.

Phase 2
For Phase 2 of the Corzo/TD Marketing Grant, I had three areas of focus. The first was to create a social media marketing plan, testing to find the most effective approach in reaching my two key demographics. The second was to create 3 social media ads with different goals, and report on the most effective approach. The third was to report on the effectiveness of the ad partnership package that was developed during Phase 1.

I created a social media plan that included 2 ads on Facebook and one ad on Instagram. On Facebook, I ran one ad highlighting a video that the UArts enrollment marketing team produced, featuring an interview with me and an explanation of the project. I spent $30 on this and tested two ad sets: one targeting 18-30-year-old urban women and one targeting 30+ suburban women. This ad was more effective on the 30+ segment, making 803 impressions versus only 547 impressions for the under 30 market. The second ad I ran on Facebook featured a few of the most popular pieces from Issue No. 2, which I put on my website as blog posts. For this ad, I spent $40 and A/B tested with the same two demos. This post was more effective for the under 30 group, earning 1673 impressions versus 1193 for the 30+ group.

For Instagram, I developed a campaign to explain why someone might follow The Bridge. It highlighted the work of the print magazine as well as the initiative to highlight women in the arts on our Instagram. It also talked about our partnership with Girls Inc. Taking Todd’s advice during our Phase 1 meeting, I bumped up my ad spend to $80 and ran it for a shorter time. This campaign was very successful with the goal of getting more followers on Instagram, with the page gaining 75 new followers in 2 days. The ad reached nearly 10,000 people, 97% that weren’t following the page.

The ad partnership package was very successful. I went into this solicitation period hoping to earn $500 but earned $700 with 8 print partnerships. The media kit was found to be very successful in appealing to my target audience of female entrepreneurs.

Phase 3
During this phase of the grant, I reported on the effectiveness of the retail partnership package, installed Google Analytics, installed an email modal window on the website, rearranged homepage content, and launched Issue No. 3.

The goal of this phase was to set up a few systems that will help the project continue to succeed. The installation of Google Analytics will help me determine how users are experiencing the site and what content is most effective. The inclusion of an email sign up will help me grow my email list to promote future issues and events. The reorganization of the homepage is meant to help lead the user through the site in the way I want them to experience it, focusing on the stories. And finally, launching Issue No. 3 is the culmination of a new strategy of print partnerships.

Google Analytics reports from the last month show the audience, frequency, engagement, and user flow for visitors. These reports have brought to my attention the limited time frame that most users spend on the website. I’ve begun brainstorming ways to keep visitor attention span for longer and lead them to the store more efficiently.

Looking forward, I plan to continue utilizing the media kit I developed as well as the print partnership package. I’m continuing to make connections with local bookstores/gift shops and hope to be in 5 stores by the end of the year. My next big idea is trying to engage the general public in a way that would be inexpensive and interesting. I’m currently considering printing one feature story from one of the first three issues on newsprint and distributing them for free around the city for people to discover. My overall goal moving forward is to continue engaging with the public in new ways while staying true to the mission of the magazine.