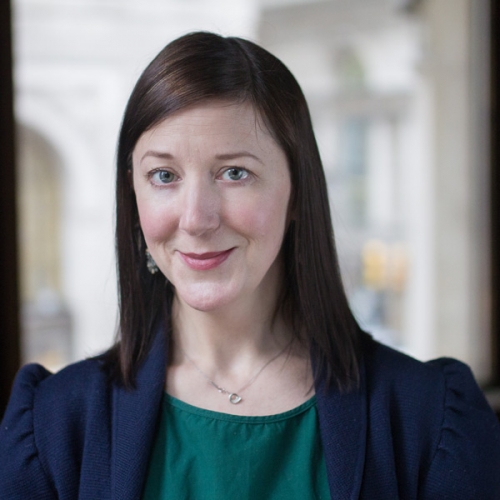 Martha Chamberlain began her dance training in Media, Pennsylvania, where she was born and raised. She went on to study with Donna Muzio, Paul Klocke and Cherie Noble at West Chester’s Dance Center and at The School of American Ballet’s Summer Program. She is a graduate of Friends Select and The School of Pennsylvania Ballet.

Chamberlain joined Pennsylvania Ballet as an Apprentice in the fall of 1989 and was promoted to the Corps de Ballet three months later. She was promoted to Soloist in 1997 and to Principal after her premiere as Juliet in John Cranko’s Romeo and Juliet in March 2000. Chamberlain has danced several leading roles including Cinderella in Ben Stevenson’s Cinderella, Katherina in John Cranko’s The Taming of the Shrew, Juliet in Cranko’s Romeo and Juliet, Aurora in The Sleeping Beauty, Swanhilda in Coppélia, Myrtha in Giselle, Dewdrop and Sugarplum Fairy in George Balanchine’s The Nutcracker and Helena and Divertissement pas de deux in A Midsummer Night’s Dream. She has also had featured roles in George Balanchine’s Ballo della Regina, The Four Temperaments, Agon, Western Symphony, Serenade, Apollo and “Rubies” from Jewels; Twyla Tharp’s Push Comes to Shove and In the Upper Room and Paul Taylor’s Company B and Arden Court. She has created roles for such choreographers as Trey McIntryre, Jessica Lang, Jorma Elo and Matthew Neenan; and she has had the opportunity to dance internationally in Portugal, England and Germany. She retired from the Pennsylvania Ballet in 2011, after dancing with the company for 21 years.

Chamberlain began teaching ballet at the University of the Arts in 2013. Previous to that she taught at The Dance Center, The School of the Pennsylvania Ballet, and Philadelphia Dance Theatre. Chamberlain has also designed costumes for many years. Among the choreographers she has created for are Christopher D’ Amboise, Matthew Neenan, Meredith Rainey, Annabelle Lopez Ochoa, Jorma Elo, Nicolo Fonte, Jodie Gates and Claudia Schreier. She is currently the wardrobe supervisor in the costume shop for the School of Dance at UArts.