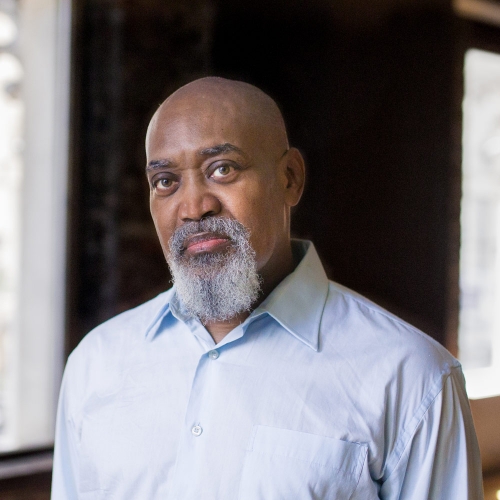 Donald Lunsford teaches Open Studio Practice Jazz. Throughout 20-plus years of instructing, he has constructed a jazz fusion dance class with therapeutic elements to condition and rehabilitate the body. His incorporation of holistic aesthetics into dynamic movement lead his direction of apprentice-, collegiate- and professional-level performing artists. Lunsford’s teachings aim to accommodate all dance idioms and moving bodies.

Donald T. Lunsford is a graduate of Temple University in Philadelphia and holds a degree in Horticultural Science. He began dancing as recreation, performing in studio concerts, campus plays and musicals. Lunsford’s formal training began at University of the Arts, where he earned a BFA in Modern Dance. At that same time, he entered PHILADANCO’s training program. Ultimately, Lunsford became the featured dancer and guest artist for the company.

Winner of the American College Dance Festival Award, Lunsford is listed in Who's Who in American Colleges and Universities and the Who’s Who Among American Teachers. He has received a certificate of appreciation from the Mayor’s Office of Community Services and has been recognized as part of the 100 Black Men Making a Difference. A recipient of a fellowship grant from the Pennsylvania Council on the Arts, he was honored with the African American Theater Arts Award, in association with the National Create-A-Drama Laboratory for research in the related arts. He attended the ADF Teachers Enrichment and Skill Enhancement training and the Philadelphia New Impulse Choreographers Workshop. Lunsford has also been a recipient of several choreographic grants, including a Philadelphia New Edge Mix and C.E.C. Dance Advance Grant.

Lunsford has taught and choreographed for Temple University, the University of Pennsylvania and Swarthmore College, among other institutions. Presently, he serves on faculty at University of the Arts, PHILADANCO, the Philadelphia School of Dance Arts and Wissahickon Dance Academy. Lunsford is also a performance coach for new and upcoming artists with the label I am Entertainment group.

Lunsford has been honored numerous times for his work.