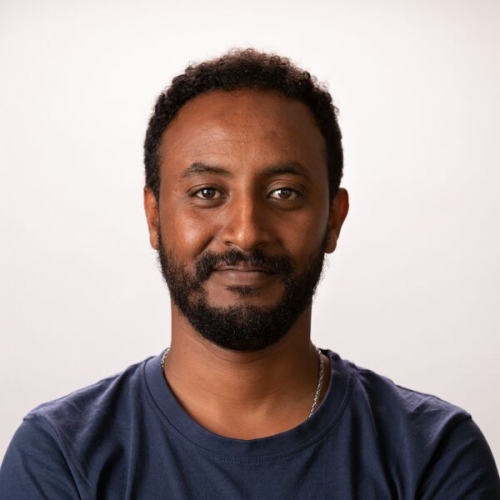 PhD candidate Abel Tilahun is an Ethiopian filmmaker and artist.

The PhD in Creativity Immersion was a life-altering experience. I gained immensely from the rich perspectives of faculty, invited guests and peers as they shared expertise and reflected on my research proposal. I am grateful for a new network of engaged scholars and practitioners, and the powerful momentum to move my research forward until we meet again.

“My film, Art and the Cosmos (working title), will be an artistic documentary on the mutual influence of art and space science. Produced as an anthology of chapters with interconnected themes, the film will have a dual focus on art in relation to NASA history and Ethiopia’s space ambitions. Would we be celebrating the 50th anniversary of the Apollo mission without George Méliès’ 1902 film Trip to the Moon? Beyond providing imagination and inspiration, artists have often collaborated with scientists, serving to visualize scientific hypotheses in a form that other scientists, diverse stakeholders and the public can understand and support. Once in space, photographs are captured, at times artistically manipulated, then circulated to further captivate audiences’ imagination. Additionally, NASA brought in artists like Norman Rockwell and Andy Warhol to mythologize their early efforts and continues to work closely with artists. Images from space have influenced culture through films, fine art and the environmental movement (e.g, images of Earth from space). Yet lest we think that space exploration began in the U.S. or the global North, the film reminds us that stargazing dates back to the dawn of Ethiopia, a nation mentioned in Genesis 2:13 and home of the only complete Book of Enoch, which contains ‘the course of the stars, their names and motions.’ (Sir Walter Raleigh, 1614) In turn, Ethiopia harbors new, burgeoning space ambitions, and what role will art play in them?”