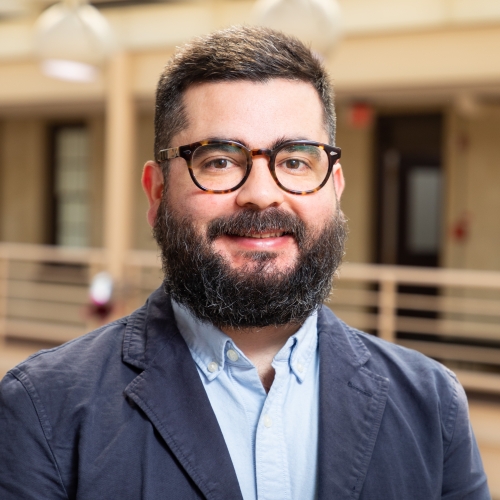 Raúl Romero started his teaching career at Yale University’s School of Art while earning an MFA in Sculpture. Since joining UArts as a media resources film coordinator in 2018, Romero has taught The Art of Sound and Image/Time.

Biography
Raúl Romero is from Valrico, Florida, and earned a BA in Communication from the University of South Florida in Tampa. While there, he worked at the Institute for Research in Art’s Contemporary Art Museum and began his career as an artist.

Since Romero relocated to Philadelphia, he has worked with many local artists and institutions, such as the Fabric Workshop and Museum, the Institute of Contemporary Art, Pentimenti Gallery and Vox Populi. He graduated from Yale University with an MFA in Sculpture and assisted teaching as a fellow of the Collaborative Center for Arts and Media.

Romero has been awarded grants from the Velocity Fund, an Andy Warhol regional regranting program at Temple’s Tyler School of Art and Architecture and an art fund award by the National Association of Latin Arts and Culture. He is a member of Vox Populi Gallery and has been a resident artist at RAIR, Recycling Artist in Residence program here in Philadelphia where he resides and keeps an active studio practice.