Like so many other artists, Jessi Kaufman BFA ’22 (Photography) was stumped by the pandemic. The unfolding COVID-19 crisis disrupted countless artists’ creative habits, their access to studio space, creative tools and usual sources of inspiration. Their creative trajectories and career expectations were scrambled and interrupted. The predicament gave Kaufman an idea for her capstone project.

Kaufman initially struck out to explore how artists were living and coping with the pandemic and how the COVID-19 headspace was affecting creativity, but she quickly discovered that the practical realities of finding one’s footing as an artist muddled the mix. 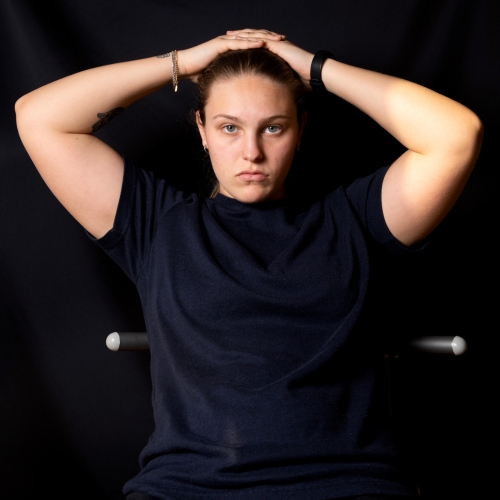 “All of my friends who had just graduated were having a very hard time making it into the art world,” Kaufman said of the struggles artists face during the pandemic. “I wanted to create a platform where it was easier to find artists, because it’s so hard to connect outside school.”

In response, Kaufman set out to develop a platform that could help elevate artists with different levels of exposure and to serve as “a one-stop shop for finding new, upcoming artists.”

The resulting platform and accompanying photo and interview series turned into Kaufman’s capstone project. Dubbed Melt, her project is a visual record of up-and-coming underground artists’ studio spaces and works, coupled with extended conversations with them. The current incarnation of Melt exists as an Instagram account showcasing local artists.

Producing the series proved to be an inspiring, affirming experience for both Kaufman and the artists featured in her capstone.

For Kaufman, producing the series was an eye-opening experience that forced her to grow as an artist and as a documentary photographer.

“It was out of the box for me,” she said. “I used to be a street-type photographer; I never had a relationship with subjects, or never took the time to sit with a project, so it was a totally different experience. The [artists] were super-comforting and let me into their minds and practices and studios.”

The experience of being let into such a vulnerable and intimate space with artists kicked off a new trajectory for Kaufman: She intends to pursue photojournalism and more documentary photography in her post-grad future.

Participating in Kaufman’s capstone project was also incredibly validating for the artists featured. For many, it was the first time their work and spaces had been documented professionally. Seeing their own works, studios and workflows from another point of view helped many of the featured artists imagine more clearly the paths they are on as creatives and artists.

UArts student Zeinab Diomande ’23 (Painting) is among the artists profiled by Kaufman. “I never had anyone document my studio experience the way Jessi did, and it was very refreshing to be in my element, the environment I spend the most time in and asked these questions pertaining to my practice,” Diomande said. “It was a wonderful experience and felt like a studio visit in a less formal way!”

With the exception of one artist, Kaufman’s subjects were strangers. In most cases, she researched and connected with artists through social media after meeting them at exhibitions. A few were UArts students. Some were entrenched in Philly’s art world.

Connecting with local artists required digging deep into the local arts community and sometimes going out on a limb to make connections. It’s also a testament to how being embedded in UArts’ and Philadelphia’s creative communities helped Kaufman flourish—as an artist and beyond.

Kaufman points to her experiences at UArts and Philly more broadly as life-changing and integral to really becoming herself. Living and practicing art in Philly helped her both find herself and flourish after coming from a more stifled background.

“Philadelphia will always have a special place in my heart, because I grew up in a very conservative area in Florida, and it definitely suppressed my creativity and my individuality,” Kaufman said of growing up in Weston, Florida, near Fort Lauderdale. “Coming to Philadelphia allowed me to come into my own. I met my partner and other gay and queer people, and I came out after being with my partner. I really just became 100% myself here, and that flows directly into the work I wanted to do. I definitely wanted to be a voice for other artists.”

Kaufman’s university experience played a key role in helping her arrive at a place from which she felt able to uplift other artists. “The UArts community was super-helpful in allowing me to become the artist I am, and this culminated in me wanting to give back to the community that allowed that to happen.”

With her capstone completed and Commencement behind her, Kaufman and her partner are moving to Miami in June. She fully intends to delve into the gallery ecosystem in Miami, meet new up-and-coming artists and keep the Melt platform alive.

“I want to find artists who haven’t come to the surface yet … [and] dedicate myself to … creating this platform and growing it outside of Miami, getting it out there,” Kaufman said of her long-term intentions. “I think it’s a good place to find artists because of how much of a melting pot it is. It’s a great place to find inspiration for continuing this project.”

Beyond tending to the Melt platform, Kaufman will be applying her photography and research skills professionally. She will be working with a civil engineering firm in South Florida, supporting the firm’s forensic, structural and architectural studies as a drone photographer—a skill she acquired during one of her many peak-pandemic creative pivots. The firm will take Kaufman’s drone imagery and integrate it into analyses determining if buildings are structurally sound.

But before jumping straight into work, Kaufman looks forward to “getting out of the hustle and bustle,” and relaxing before focusing on building a photo studio once the move and capstone project are in the rearview mirror.