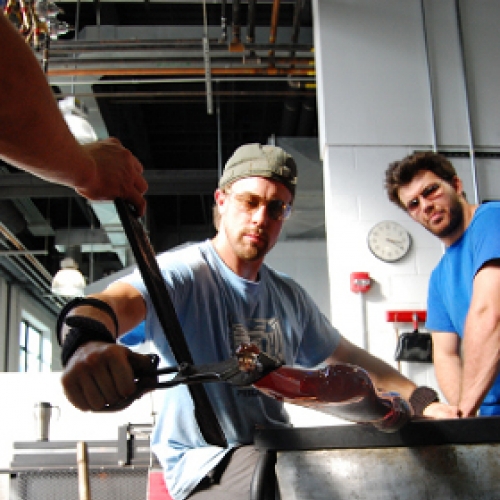 Christopher Lydon is a Philadelphia-based glass artist producing a body of work that is continually fresh, modern and distinctly off-beat. His organically-based sculptural and vessel forms have roots in the natural world. Intense color contrasts reference street art and anime and emphasize texture in each object. These elements are brought together in glass through a technically demanding process in which the elements of any object are sculpted individually in hot glass, then carved while cold and assembled hot.

In addition to this work, Christopher produces his own line of decorative glassware, commissioned installations, and sculptural objects. He has designed and executed a series of sculptures based on the cubist paintings of Alexandra Nechita, collaborated with major designers and artists on site-specific installations in the Borgata in Atlantic City, NJ, the Hard Rock Casino in Tampa, Florida, the Loire Castle in France, the American Academy of Roman Art in Italy, and has traveled to the Val Saint-Lambert glass factory in Belgium to gaff as part of such projects.

Christopher teaches glassblowing and hot sculpture locally in Philadelphia and nationally in such studios as the Pittsburgh Glass Center and the Corning Museum of Glass. His individual body of work is exhibited widely on a national level.