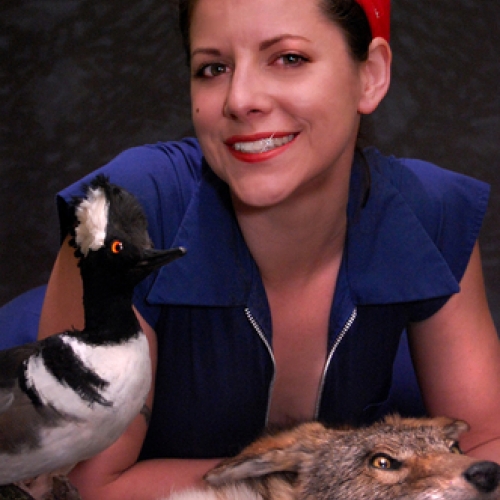 The Pre-College experience is precious to me and now I have come full circle through exhibitions and teaching at the University.

Beth doesn’t remember a time when she wasn’t interested in making things. As a young girl, she brought home shells and pebbles from visits to the Jersey Shore with her family and turned them into jewelry. It was her first experience of creating wearable art from natural elements. She found her way to the Pre-College program through a high school friend who had attended Saturday School and showed her a brochure: “it sounded cool.” After just one class, she was hooked. She hadn’t been exposed to art or many cultural experiences as a kid and Saturday School opened up a whole new world to her. “It was a precious experience for me that I look back on with great fondness and appreciation because it helped shaped my connection to the arts,” she says. After undergraduate classes at Temple University, Beth changed course, pursuing a new dream: to learn the art of taxidermy, inspired by her love of animals.

Following her heart led to success as a creative entrepreneur—Beth is the owner of Diamond Tooth Taxidermy (she did once have a diamond on one of her teeth!)—prominence in the field of “alternative and couture taxidermy” and leadership in the emerging arena of competitive taxidermy. Along the way, she has worked as a designer of window displays for major retail outfits and hotel vitrines in Philadelphia; a set designer for cruise ships with Scenery First Inc., and as an educator. She has hosted major taxidermy competitions in Philadelphia and participated in competitions in New York; exhibited her work and presented educational lectures and seminars at galleries, museums, universities, and cultural institutions; and has helped to train and inspire a new generation of artists through her teaching at the University of the Arts.

In her work as a taxidermist, Beth designs, produces, sells, and exhibits wearable art (including award-winning hats), unusual home décor, retail displays, and objects for use and display at events. She obtains most of the animals for her creations from Ardelia Farm, owned and operated by friends in Vermont, and she is committed to elevating the field of taxidermy through the intersection of technical skill and creativity, craftsmanship and artistic vision. Beth has been widely recognized for her achievements. After her entry won “Best in Show” in a national “rogue taxidermy” competition held New York City in 2010, she was cast in the AMC’s cable network television show “Immortalized.” The piece she created, “Self Portrait,” a coyote with its kitten (which won the competition) is one of which she is especially proud, above all because it required her to engage with a lot of other people in order to tap into expertise she did not possess in order to compose the piece she envisioned.

Experiencing an adult, collegiate environment had an enormous impact on me.

Beth’s Pre-College experience helped her develop new skills and explore the arts in a more formal way and also gave her a taste of college life. She appreciated how different the program was from high school and was happy for the opportunity to take responsibility and to be held accountable for herself. Now as a teacher in the Pre-College Summer Institute and Saturday School, she is impressed by the creativity and original thinking of the students and is delighted to be able to share her passion for the art of taxidermy. “I love teaching,” she says, “Young people, in particular, are especially open-minded about the field.”

The arts are a way of learning about how everything in the world is connected.

A love of animals and a deep connection to the natural world drew Beth to taxidermy as a way to create art that is, quite literally, life-sustaining. That sense of connection is what she hopes to impart to young people through her teaching. “The art of taxidermy is a way to show kids how everything is connected and of helping them to appreciate the lives and bodies of animals.” Beth continues to work part-time for Scenery First, Inc. and finds it extremely useful to collaborate with designers, carpenters, and engineers from whom she learns a lot about materials and techniques she employs in her own creations. The work she is proudest of is simply having followed her heart. “It wasn’t always easy and I was not always successful, but every day I got up and I knew I had to keep at it and take care of business.” These days, “taking care of business” involves Beth in the design and production of commissioned objects and wearable art for individual buyers, work for Gallery shows—in 2016, she exhibited her work at the University of the Arts and at University City Science Center and she hopes to do more gallery work—preparations for the arrival of her first baby in the spring of 2018, and a future move with her husband to continue on their quest for “basic and simpler lifestyle.”