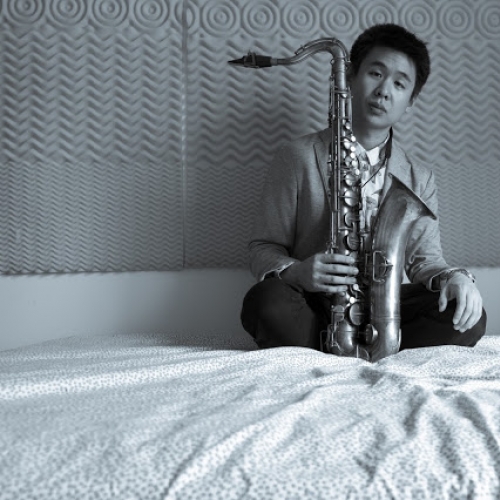 Summer Institute shaped who I am as a musician and has influenced the way I approach nearly everything I do.

During the week, jazz saxophonist Kevin Sun spends his days among computational scientists and biologists, applied mathematicians, and engineers—“great, amazing, brilliant people”— in midtown Manhattan, where he works as an administrative assistant for a scientific research group. Aside from when he’s playing gigs with his trio or other ensembles, however, Kevin spends nearly every evening practicing. Juggling a demanding “day job,” composing (the Kevin Sun Trio plays his original compositions almost exclusively) and performing can be a challenge, but Kevin has always embraced life in double time. As an undergraduate completing a dual BA (with a major in English) and a MM (Masters of Music) at Harvard University/New England Conservatory of Music, respectively, Kevin was associate editor of The Harvard Crimson’s “Fifteen Minutes” magazine; a News producer and show host at WHRB 95.3 FM; an intern for the popular Leonard Lopate Show on WNYC, where he conducted research and wrote on-air copy; a recipient of prestigious awards, including the Yamaha Young Performing Artists Jazz Competition and Vandoren Emerging Artists Competition; and a blog editor and freelance grant editor for The Jazz Gallery in New York City.

Kevin credits his Summer Institute at UArts experience with helping him develop the patience, discipline, persistence, and stamina to tackle any challenge and pursue new opportunities. “I had experiences in Summer Institute that have had a lasting impact both on my daily practice of music and my approach to any and everything I choose to pursue.” Kevin’s pursuits in music have included yearly trips since 2015 to perform at major jazz clubs in Beijing and Shanghai;—he is the son of Chinese immigrants (Mandarin Chinese is his first language), and his first saxophone was a Chinese-made instrument his parents bought him on a family visit to China at age 10. Kevin has also produced three recordings with the ensembles Earprint, Great on Paper, and the Kevin Sun Trio, and he is currently conducting his own research into the C-melody saxophone (larger than an alto and smaller than a tenor), which ceased production after the Great Depression ended the saxophone craze of the Roaring Twenties, but which has been cited as an influence on major jazz saxophonist Lester Young, Sun’s current favorite saxophonist.

Our teachers led by example. We learned that it’s important to bring love, care, and attention to every endeavor you’re engaged in.

A high school music teacher who is a UArts alum suggested that Kevin consider attending Summer Institute. A scholarship made it happen. It was his first experience spending time with other young people devoted to music and dedicating concentrated time to learning something “endlessly deep.” Instruction from artists who were great musicians and who had also studied with legendary musicians was a formative experience. “This is the feeling you want to have for everything you do.” It inspired him to attend Summer Institute— once again with scholarship support—for a second summer.

One thing studying the arts helps you to do is to learn how to focus.

Summer Institute, Kevin says, provided a rock solid foundation and education. “There is no substitute for this type of experience.” Rigorous expectations. No short cuts. “When you are young, you absorb bits and pieces in the moment. Later you realize the full impact of what you have learned and how it applies to so many different areas and sets you up to take on new challenges.”