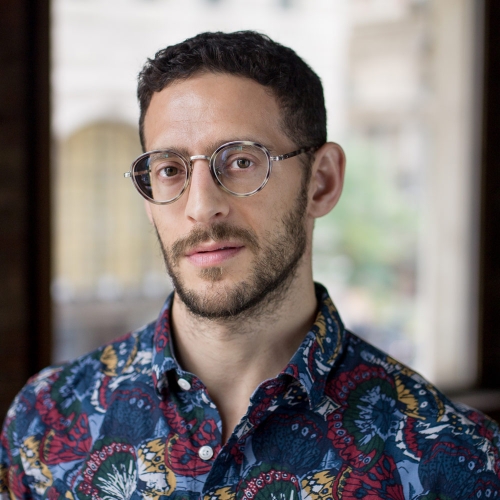 Jesse Zaritt is a Brooklyn-based dance artist. He is an Associate Professor at the University of the Arts, having previously been the inaugural 2014–2016 Research Fellow in the School of Dance. He has also taught at Bard College, Hollins University, Pomona College and for ten summers at the American Dance Festival. Jesse has performed his solo work in Taiwan, Uruguay, Russia, Korea, Germany, Japan, Mexico, Israel and throughout the United States. His solo Binding was the recipient of three 2010 New York Innovative Theater Awards—Outstanding Choreography, Outstanding Solo Performance, and Outstanding Performance Art Production. A duet created with Katie Swords Thurman premiered at the Museum of Art and Design (NYC) in October 2015 and was recently remounted and shared as part of the 2019 Philadelphia Fringe Festival. Jesse worked collaboratively with Jumatatu Poe from 2012-2015; their duet was presented by Gibney Dance Center (NYC), AUX Performance Space at Vox Populi (PA), Triple Canopy (NYC), Dixon Place (NYC) and New York Live Arts (through the Studio Series Program). He was commissioned by the American Dance Festival to create a duet alongside Mark Haim which premiered as part of the 2015 ADF performance season. He has performed with the Shen Wei Dance Arts Company (NYC, 2001–2006), the Inbal Pinto Dance Company (Tel Aviv, 2008), and in the work of Netta Yerushalmy (NYC, 2009–2016) and Faye Driscoll (NYC, 2010–2015); he is an artistic adviser for Driscoll's ongoing projects. Jesse currently works in creative dialogue with Sara Shelton Mann.

From September 2008 through June 2011, Jesse was an artist in residence at the 14th Street Y in Manhattan as part of LABA, a laboratory for new Jewish culture. He was the recipient of a 2006-2007 Dorot Fellowship in Israel which enabled him to research relationships between political conflict, resistance and choreographic practice. Jesse received an MFA in Dance from Hollins University/The American Dance Festival (2008) and a BA from Pomona College (2000).