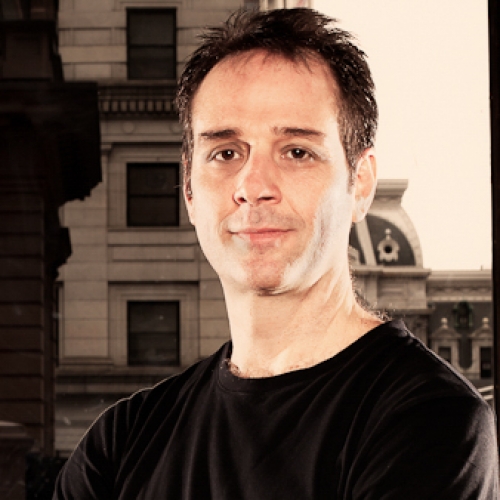 Curt Haworth is an expatriate Californian who choreographed and danced in New York City for twenty years before moving to Philadelphia in 2009. He holds a BA in Creative Writing from UC Santa Cruz and a MFA in Dance from NYU’s Tisch School of the Arts. He has an eclectic movement background ranging from Modern Dance and Contemporary Modern techniques to African Diasporic Dance, Yoga, Contact Improvisation, and Ballet. He has studied Ideokinesis intensively with Irene Dowd, and has been influenced by somatic studies in Alexander Technique, Klein Technique and Body Mind Centering. Curt performed with Race Dance and Yoshiko Chuma’s the School of Hard Knocks, and toured internationally with David Dorfman Dance from 1990 to 2002, while creating over 15 original roles. He was a Movement Research Artist in Residence in 2001-2002, and has taught regularly in NYC at Movement Research and DNA (formerly Dance Space Center). He has taught and set work as a guest artist throughout the United States, Europe, South America and Asia including 10 years at the American Dance Festival (ADF) and the Tisch Summer Dance Residency.

His work has been presented in Philadelphia at: the Annenberg Center, The Painted Bride, The Performance Garage, The CEC, Philly PARD, Mascher Space and various Fringe venues. His work has been presented in NYC at: The Danspace Project, LA MAMA, DNA, Symphony Space, Movement Research at the Judson Church, IFNY, Dixon Place, PS122, Metamorphosis, DanceNow, New Dance Alliance. Additionally, his work has been presented at: Cultivate Festival NH, X-Fest MA, Frantasia ME, Earthdance MA, Rockland Community College, Bennington College, Buenos Aires Argentina, Tanecne Divadlo Festival Bratislava Slovakia and the ADF. Curt holds the rank of Professor at UArts, where he has taught since 2002.