University of the Arts recently celebrated the grand opening of the Laurie Wagman Recording Studios on the 11th floor of Terra Hall. On Wednesday evening, Nov. 13, School of Music faculty, staff, students, university administrators and honored guests gathered to dedicate the space to its benefactor, Trustee Laurie Wagman. The opening of these state-of-the-art recording studios marks the culmination of the School of Music relocation and renovation project, which started in June 2018 and also features brand new rehearsal, classroom, office, lab and production spaces.

“The studios are a transformational gift to our School of Music and MBET program, which is experiencing incredible growth,” said Yager upon the announcement of the gift. “Laurie Wagman is deeply connected to the students and programs at UArts through her commitment of time and financial support and her personal relationships with students.” 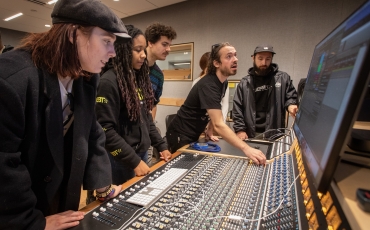 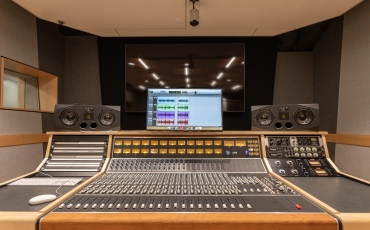 Both recording studios are equipped with state-of-the-art, 24-channel API consoles and Antelope interfaces. There is a surround sound system in Studio A, while Studio B has a pair of Adam reference monitors. Both studios have a number of outboard compressors, equalizers and other effects processors. Studio A will also function as a fully analog space equipped with a 16-track tape machine.

“These are some of the best spaces I have ever seen in an urban university setting,” says Dean Jones. “Now, we have an environment where our students’ creativity can thrive. I cannot express how grateful we are for Laurie Wagman’s unwavering support of the school and where it is heading. Likewise, to our president, who has not only encouraged us to reimagine our campus, but has taken action to make those dreams a reality.”

Wagman’s generosity also helped create Laurie Wagman Presents, an MBET concert series managed and promoted by the program’s students, including Out of the Box, a series which promotes experimental, electronic and improvised music, mostly composed by MBET students and often featuring guest artists working at the fringes of their disciplines.

Wagman’s philanthropic focus is in the arts, education and social services, and she has been the recipient of numerous awards for her dedication to young people. She is the founder and president of American Theater Arts for Youth lnc. and American Family Theater. Under her four-decade leadership, the two organizations have presented professional, original musical productions to more than 32 million students throughout the U.S. In addition to University of the Arts, Wagman also serves on the boards of the Kimmel Center for the Performing Arts, the National Children’s Theater Alliance and the Philadelphia Chamber Music Society.

Learn more about about Uniquely UArts, the campaign for creative capital.