Each year, the Holle Awards for Excellence in Creativity and Communication reward “innovative, out-of-the-box thinking” in media writing, public speaking, film, screenwriting and book arts. This year, Maria Welch ’20 (Book Arts & Printmaking) was selected for the Holle Award for Excellence and Creativity in Book Arts for her submission, "Erratic Obsession." Welch’s piece is a visual representation of mental illness to encourage dialogue around the topic. 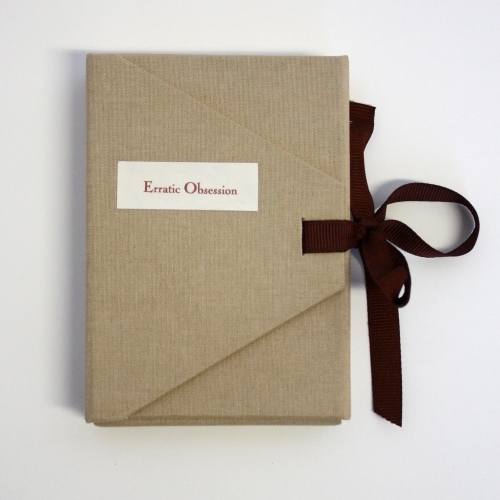 Erratic Obsession uses text from Charlotte Perkins Gilman’s "The Yellow Wallpaper" and Annie Payson Call’s "Nerves and Common Sense," two impactful pieces that focus on mental illness in women. In "Erratic Obsession," Welch wove together lines from both works to represent struggles with mental health, specifically the dissonance “between what one presents to the public, what is suppressed, and what societal expectations cause mental strain on a person,” she explained.

In addition to the textual elements, Erratic Obsession includes patterns and images drawn from a 2018 performance centered on repetition as a coping mechanism when unable to stop thinking about a specific memory. Welch photographed the footprints from the performance and created stencil outlines that were used to create the images in Erratic Obsession. The Holle Award judges praised Welch’s work for how well the form accentuated the subject matter, calling Welch “a master of [her] craft.”

As part of the award, Welch will receive a $10,000 prize, which will allow her to fund her artistic projects and look for a studio space after graduation. “I am thrilled that I will have not only a studio to work in, but the necessary tools to continue making paper after I lose access to the school’s facilities,” she said. “This funding ensures that I have physical space and the essential equipment to make my work, and I am so grateful for this security in the progression of my practice.”