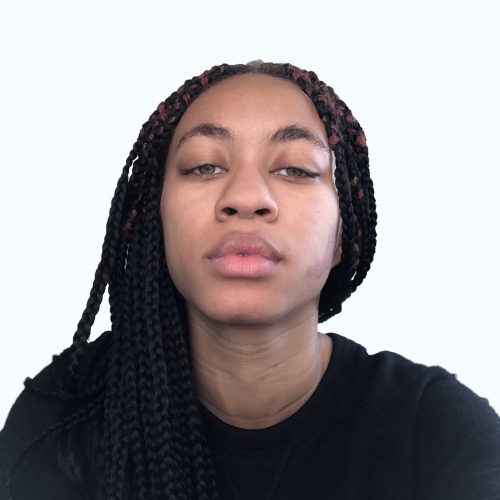 Jessie Thornton is, as both a visual and performing artist, deeply interested in the crossings between literature, visual art and movement. Their work investigates the economy of space, the shrinking and unshrinking of the body, abstraction, refusal and invisibility as tools for the survival of the marginalized, the hyper visible. They navigate themes of black queerness and gender identity via temporality and secrecy, and close attention. Jessie began their studies at the University of the Arts in Painting, at which point they began investigating the painting as something existing not just as an object or artifact, but an activity and a lens through which to see, shape and investigate. They enter this MFA program with both an Associate's and Bachelor's degree in Painting, as well as curatorial experience as a UArts Curatorial committee member. They carry the Ernest W. Greenfield award in Painting, and a Presidential Award for Creativity. Jessie most recently presented their work, Speaking of liveness, as part of their department's Thesis Festival.