The Philadelphia Art Alliance at University of the Arts is pleased to present an exhibit of four contemporary American sculptors who reach beyond the restraints of Minimalism in a neo-constructivist manner. Each of these artists’ works are variously informed by domestic forms, additive practice and exuberant color. Reconfiguring modernism, they adapt pictorial modes that address the traditional floor and the wall sites of sculpture. There is a fluency to these structures that extends beyond familiarity and entices viewers to unravel complex references to sculptural history and meaning.

Sarah Braman pairs translucent glass against ragged solid masses of stained wood, creating volumes suggestive of sacred spaces where sheltering interiors meet the profane materiality of vernacular experience. She has a particular color sensibility that is her signature; the purple or blue panes are almost iridescent in dichroic color and her stained wood evokes a particularly cool mood. The spatial masses are often balanced off-kilter while using alternative sculpture means such as chairs for bases or cabs of scraped vehicles for sheltering canopies. Thus, formally her work bridges post-minimalism and color-field painting while also suggesting home life and lived experience.

Kenji Fujita’s small-scale pictorial sculptures dance around in colorful arabesques, cantilever off the wall or mimic refuse bags ready for disposal. There is almost a punk casualness to Fujita’s constructions; their prominent screws revealing their process of manufacture like DIY furniture. Yet Fujita’s works seem to resonate with Frank Stella’s extravaganzas, Stuart Davis’s colonial cubism and the aggressive spatial thrusts of Di Suvero and Joel Shapiro. He punctuates several bare wood sculptures with brilliant flat color planes, a graphic punch like Calder. His works also resonate with the efforts of his father, S. Neil Fujita, the noted graphic designer, whose works gave us the Godfather movie logo and classic Columbia LP covers for Miles Davis, Charlie Mingus and Dave Brubeck. S. Neil Fujita taught at University of the Arts and previously exhibited at the Art Alliance.

All furniture is functional sculpture. Roy McMakin takes this as a given while investigating space and the questioning intersection of utility, design and philosophy. His efforts extend Duchamp’s conceptualism, the bases and benches of Brancusi and the furniture-sculptures of Scott Burton and Richard Artschwager. Some of his objects are actual assisted readymades or elements thereof: tables, chests or chairs are conscripted into service as functional sculptures or embedded within sections of larger ensembles. McMakin often creates original sculptures that could actually function as home furnishings. As such, he makes us question our assumptions and our aesthetics. He makes us slow down our perceptions in order to differentiate what is a real drawer from one that quotes the Platonic idea of one.

Perhaps the most formal of the four artists, Richard Rezac’s mirrored compositions are complex entities that beg for careful perusal. Everything is considered. His manipulated surface finishes are essential as are his refined color sensibilities. Rezac utilizes a subtle variety of materials, processes, colors and surfaces; producing physical objects while patently aware of the graphic capacity of their forms. He situates his sculptures variously: rising from the floor, mounted on the wall or suspended. By playing off cast volumes to flat images on the wall, Rezac creates site-specific installations. Thus his practice insinuates itself into the heritage of architectural ornaments and art historical references. Meaning begets meaning. But one should be aware that this is not just arch historicism nor quotations of late Minimalism. Although Rezac is able to amalgamate elements of Chicago architectural history and Italian Mannerism, playful quirks occur in his compositions, where symmetry breaks down and mirroring is inappropriately misquoted.

These four sculptors are being shown concurrently with an installation by Wilmer Wilson IV at Rosenwald Wolf Gallery of University of the Arts.

Our exhibitions are free and open to the public. 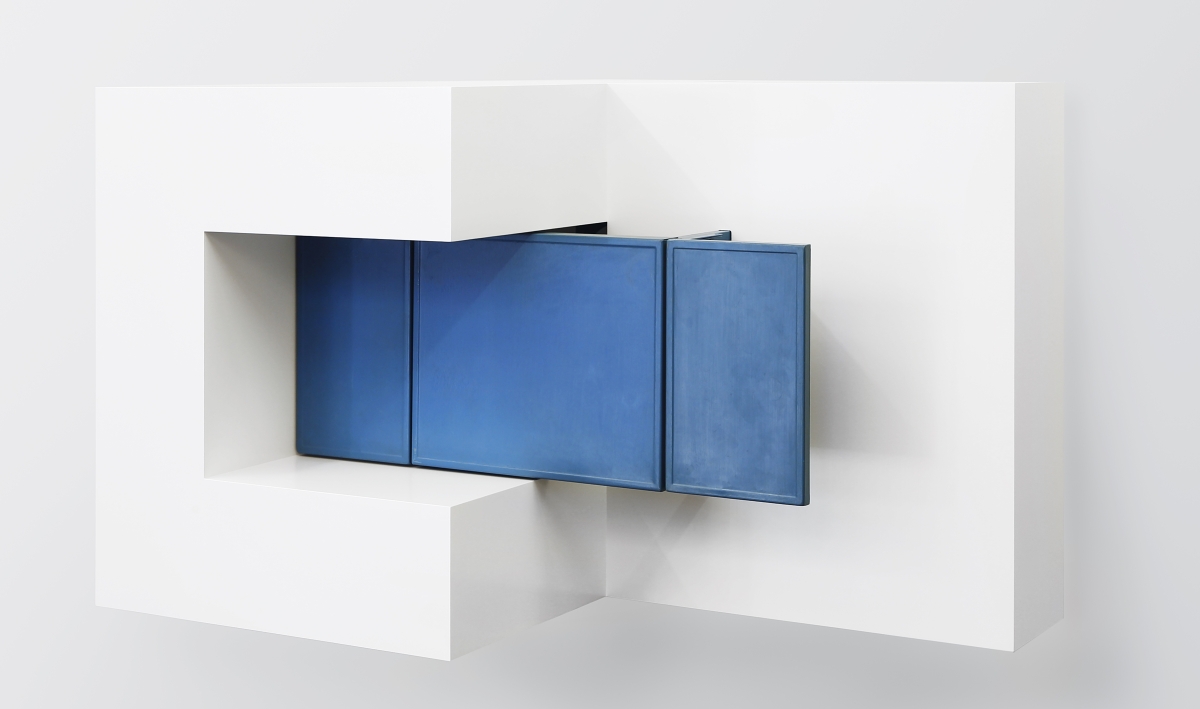 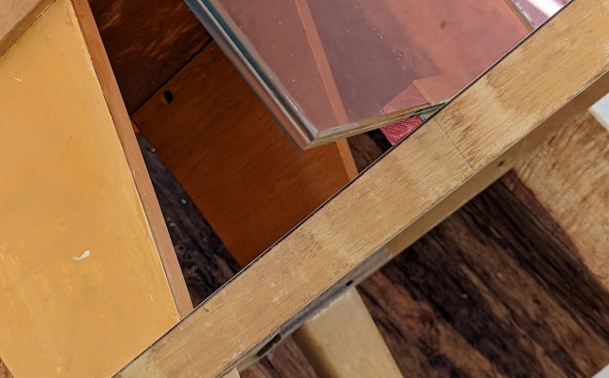 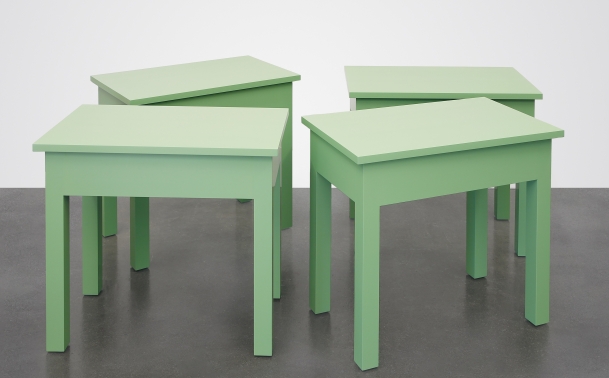 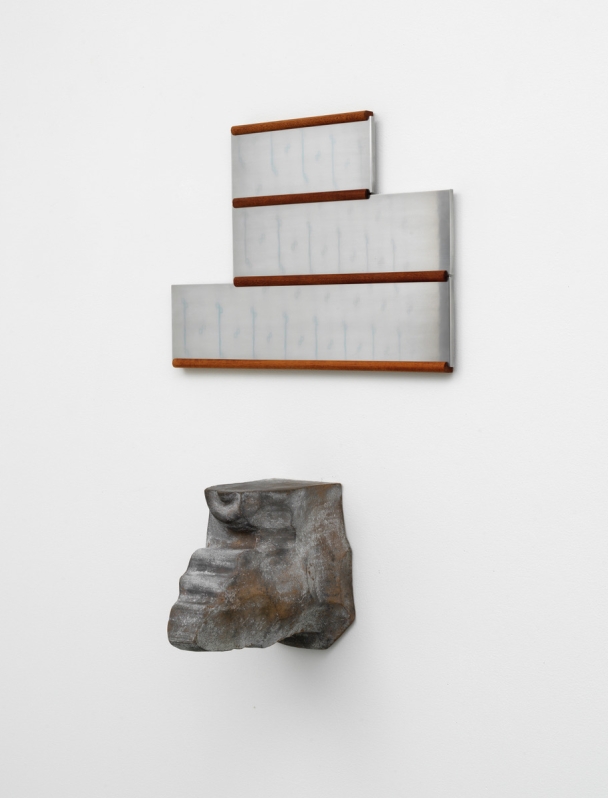 Left: (top) Sarah Braman. Courtesy of the artist and Mitchell-Innes & Nash; (bottom): Roy McMakin, "Four Green Tables (one to be used in my new home, one to be sold by a gallery and used as a table in the purchaser's home, one to be acquired by an institution to be conserved in original condition, one to be donated anonymously to a thrift store)", 2016, enamel on eastern maple, 27 1/2 x 30 x 18 inches. Courtesy of the artist and Garth Greenan Gallery.

Sarah Braman was born in 1970 in Tonawanda, New York and currently lives and works between New York and Amherst, MA. Braman received a BFA from Maryland Institute College of Art in Baltimore and an MFA from Tyler School of Art in Philadelphia.  Braman is one of the founders of New York’s artist-run gallery CANADA and is represented by Mitchell Innes and Nash Gallery.

Kenji Fujita has been making and showing work for over 30 years. He was born in New York City and lives in Staatsburg, NY. Fujita has shown widely and teaches sculpture at Bard College.

Roy McMakin was born in Lander, Wyoming in 1956. McMakin is a San Diego-based artist, designer, furniture maker, and architect. He received his MFA from the University of California, San Diego in 1982. McMakin is represented by Garth Greenan Gallery.

Richard Rezac was born in 1952 and lives and works in Chicago. His work is in the permanent collections of The Art Institute of Chicago, Dallas Museum of Art, TX and Yale University Art Gallery, New Haven, CT, among others. Rezac is represented in New York by Luhring Augustine Gallery.