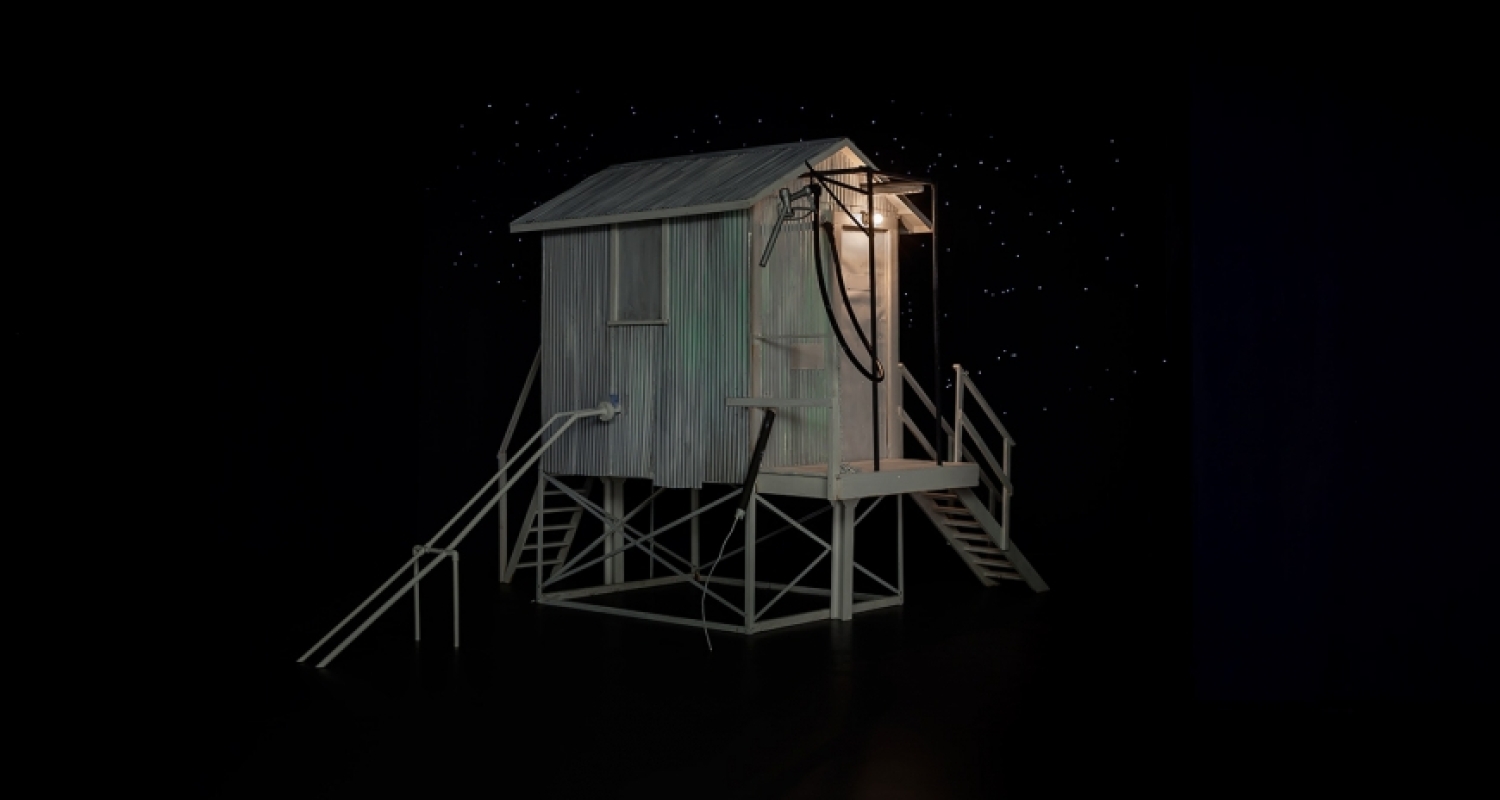 The Philadelphia Art Alliance of the University of the Arts is pleased to present an exhibition of works by Donna Dennis.

Born in 1942, Dennis is an American sculptor, painter and printmaker. She is one of a small group of vanguard artists including Alice Adams, Alice Aycock, Jackie Ferrara and Mary Miss, who pushed the boundaries of sculpture away from Minimalism and toward the domain of architecture in the early 1970s. Architecture provided the means to express different concepts than unemotional formal gestalts.

Dennis’s buildings are not real but symbolic. In first grade, she remembers drawing half a house and insisting that the other half was invisible. Sometimes that which is not seen is more substantial than a void. Childhood experiences making tree houses and forts informed her later work. She takes as models tourist cabins, hotels, subway stations and other overlooked architectonic fragments as locations of spirit. By representing forlorn vernacular structures slightly smaller than real scale, Dennis condenses space and creates an aura of the uncanny. One approaches the structures as if they are real buildings only to realize they are poetic constructs, follies on the way stations of life. Poetic indeed, as her work has been informed by collaborations with poets Anne Waldman, Kenward Elmslie, Daniel Wolff, Ted Berrigan and performance artist Dan Hurlin. (Dennis’ high school yearbook labeled her “class poet.”)

"Little Tube House and the Night Sky" (2015), was based on a small industrial cabin Dennis glimpsed in Duluth, Minnesota. Dennis surrounds the small structure with a darkened space: the night sky gently illuminated by stars and quiet, barely heard sounds of the wind. It was dedicated to a young friend who died quickly and too young of cancer. As such, its elegiac air is subconsciously understood. The viewer becomes enveloped in the vast space of the universe even if they can’t follow the journey nor enter into the shelter.

In the Art Alliance’s Gallery A are a series of new dioramas. These also continue the mood of isolation at a much-reduced size but not diminished feeling.

Our exhibitions are free and open to the public,

Dennis has had solo exhibitions at The Brooklyn Museum, the Neuberger Museum, the Sculpture Center, Mixed Greens, Gallery Joe and Holly Solomon Gallery. Her work has been shown in the Venice Biennale, the Whitney Biennial, the National Academy Museum, the American Academy of Arts and Letters, the Walker Art Center, MoMA PS1, Tate Gallery, ICA London and Ludwig Forum für Internationale Kunst, among others.

Her work is in the collections of the Brooklyn Museum, the Cleveland Art Museum, the Microsoft Collection, the Walker Art Center, Ludwig Forum für Internationale Kunst in Aachen, Germany, the Indianapolis Museum, the San Diego Museum of Art, the Smithsonian American Art Museum, the Neuberger Museum, and the Martin Z. Margulies Collection. Her permanent public art commissions are located at John F. Kennedy Airport, P.S. 234, Queens College and at the Wonderland MBTA Station in Boston.

Dennis is the recipient of four Pollock-Krasner Grants (2016, 2009, 2005, 2001), the Harpo Foundation Grant (2013), three National Endowment for the Arts Fellowships in Sculpture (1994, 1986, 1980), the New York Foundation for the Arts Fellowship in Painting (1992), the New York Creative Artists Public Service Grant (1981, 1975) and a John Simon Guggenheim Memorial Fellowship in Sculpture (1979), among others. In 2015 she was awarded the Anonymous Was A Woman Award, in 2014 she received the Award of Merit Medal for Sculpture from the American Academy of Arts and in 2008, the Malvina Hoffman Artist Fund Prize and Daniel Chester French Award for Sculpture from the National Academy Museum and School. Her public art designs have received the Bard Award of Merit in Architecture and Urban Design from the City Club of New York (1989), the Community Service Award for Excellence in Urban Design from the Parks Council of New York (1989) and the Award for Excellence in Design from The Art Commission of the City of New York (1987).

In recent years, Dennis received the prestigious Artists’ Legacy Foundation Award. She was elected to the National Academy of Design in 2010 and is Professor Emerita at Purchase College, SUNY. Dennis lives and works in upstate New York. We are grateful to Suzanne Delehanty for her assistance in this exhibition.