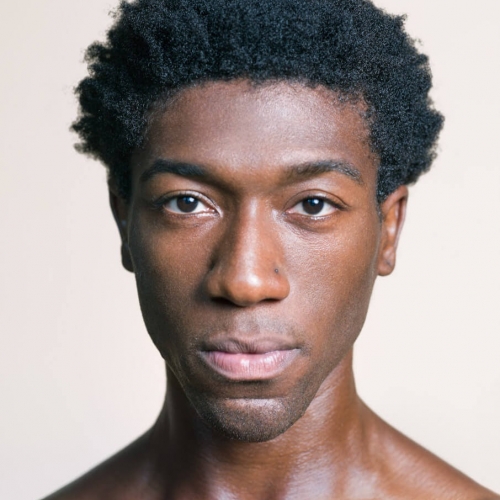 Da’ Von Doane began his training at the Salisbury Studio of Dance, where he trained with Betty Webster, Tatiana Akinfieva-Smith and Elena Manakhova. At age 15, he began training at Atlantic Contemporary Ballet Theatre as a full-time academic student and remained there for four years. In 2008, Da’ Von moved to New York City to join the Dance Theatre of Harlem Ensemble. In 2009, Da’ Von performed with Ballet Noir at East River Park, as part of SummerStage, and at Jacob’s Pillow. In the fall of 2009, he began dancing as part of Dance Theatre of Harlem (DTH), and that winter he began touring with DTH as part of its Dance for America tour. As a guest artist, Da’ Von has performed with the Classical Contemporary Ballet Theatre and with choreographer Ja' Malik in 2009’s E-Moves Emerging Choreographers Showcase. In the summer of 2010, Da’ Von performed once again with Ballet Noir in the 200th Anniversary Chopin Celebration and the 2010 World Dance Gala in Kielce, Poland. Da' Von joined the newly reborn Dance Theatre of Harlem in 2012. Da’ Von was featured as one of Dance Magazine's Top 25 to Watch in 2014 and in a new dance web series For the Love of Dance with Sarita Lou. Da' Von can be seen in Estelle's new video for the single "Conqueror" from her new album True Romance, directed by Paul Jung. With The Dance Theatre of Harlem, Da' Von can be seen in various roles from "Black Swan Pas de Deux" staged by Anne Marie Holmes, "Act III Pas de Deux" from Raymonda, Dancing on the Front Porch of Heaven by Ulysses Dove, and Balanchine's Agon and Tchaikovsky Pas de Deux. He was also part of Nacho Duato's Coming Together and works by other choreographers such as Robert Garland, Tanya Wideman and Thaddeus Davis, Helen Pickett, Donald Byrd, Bill Wilson, Arthur Mitchell, Darrel Moultrie, Francesca Harper and John Alleyne. Da' Von performed this year as part of the Vail International Dance Festival's International Evenings of Dance as well as the NOW: Premieres program alongside dancers from NYCB, ABT and more. As an independent artist, he has performed with numerous companies and worked with choreographers from across the globe. Da' Von Doane has also created a number of original dance works curated and presented by Bryant Park, Thelma Hill Performing Arts Center, Dance Theatre of Harlem, Periapsis Music and Dance, the CUNY Graduate Center, Composers Now Festival and Symphony Space. Da' Von is currently pursuing his graduate degree at University of the Arts.