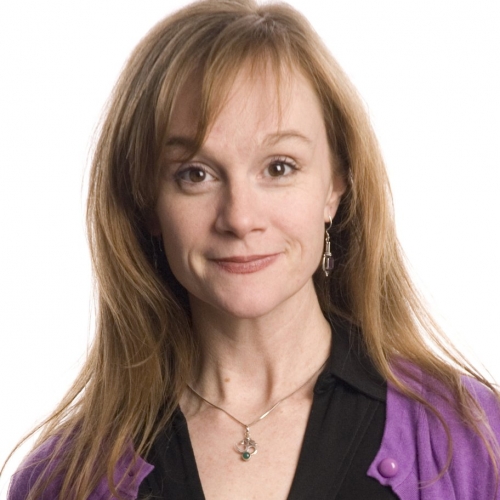 When we founded 1812, there was a statistic floating around that the average person laughs only once or twice a day. Clearly, the world needs more comedy.

All Jennifer Childs BFA ’90 (Acting) wanted as a kid was to be like Vivien Leigh. A great actress. Dramatic. Serious.

"But then...I also wanted to be in a Bugs Bunny cartoon," the comedienne confesses. "Then I saw Carol Burnett's version of ‘Gone with the Wind,’" she adds, "and I thought, ‘Oh. I can be both...I want to be both!’"

And Jen is certainly letting her funny flag fly. Part Looney and part Leigh, she's got an indefatigable combination of soul and spunk that has transformed a doe-eyed ingénue into Philadelphia's comic queen.

She is co-founder and artistic director of 1812 Productions, the only professional theater company in the country dedicated to comedy. Accolades include a Barrymore Award for Excellence in Theatre Education and Community Service for 1812 Outreach, the company’s education program, and a $138,000 Theater Initiative grant from the Pew Center for Arts and Heritage to create the two-year "Women and Comedy Project," which was nominated for a 2013 Barrymore Award. In 2010, 1812 was honored as one of only 10 theaters in the country to receive a National Theatre Company grant from the American Theatre Wing, founder of the Tony Awards.

Since 1997, Jen and fellow UArts alum, actor, director and teacher Peter Pryor BFA ’90 (Theater Arts) have led 1812 Productions, staging more than 33 comic concoctions, including 14 world premieres. In addition to mounting regional premieres of published playwrights, the company has become a unique home for the development of new work that celebrates America's legacies of laughter.

1812 Productions owes its genesis and its name to an unassuming row home at 1812 Pine Street in Center City Philadelphia. "It was a sort of artist's flophouse," Jen recalls. "We lived with a collection of actors, dancers, sculptors, painters and the occasional German tourist.

"When we founded 1812, there was a statistic floating around that the average person laughs only once or twice a day. Clearly, the world needs more comedy."