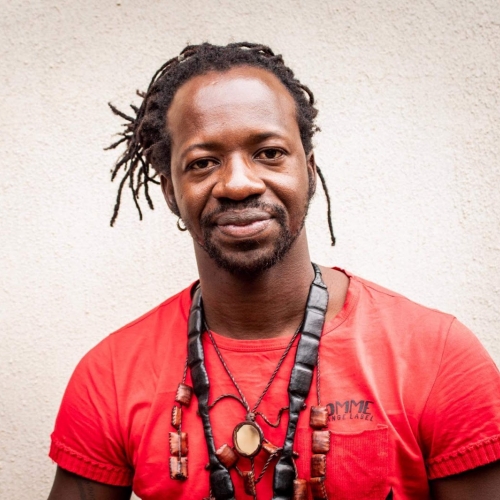 Dancer and choreographer Aguibou Bougobali Sanou (known as ‘Bougobali’) hails from Burkina Faso, West Africa. The winner of the highly selective and prestigious US State Department Scholarship Fulbright, 2018-2019, he taught History and Appreciation of World Dance for two semesters and developed the African Traditional and Contemporary Dance curriculum at Naugatuck Valley Community College in Waterbury, CT. In 2016, he was a emi-finalist of Africa’s Got Talent. Bougobali trained with choreographers and theatre directors such as Salia Sanou, Carolyn Carlson, Thierry de Mey, Luca Fusi GM and Régine Chopinot Alexandre de la Caffinière. Aguibou has won several choreographic awards including the bronze medal in the 2013 Jeux de la Francophonie in Nice, France; 2nd prize of SNC 2012; and Delphic Laurel Award in the 2009 Delphic Games in South Korea.

Aguibou Bougobali Sanou’s work is a mix of West African Mandingo traditional dances, Brazilian Capoeira and theater expressions drawn from his work with influential European stage directors. His training in sacred and profane African traditional dance in his native country combines with other forms of expression to create a unique theatrical statement.

His work starts with a warm up which allows for a full body awareness and stimulation of the body's energy using African and/or Capoeira music and song. After sharing traditional dance movement, he leads students to the creation of exciting phrases and exploration of African-based movement of their own. Aguibou has also created a dance program in a prison in Burkina Faso and has worked with more than 70 prisoners in order to help to reenter the society.

In the past ten years, Bougobali has developed a dynamic performance and teaching presence which has led him to work assignments in Mexico, Israel, South Korea, India, Indonesia, Morocco, France, France and the United States.