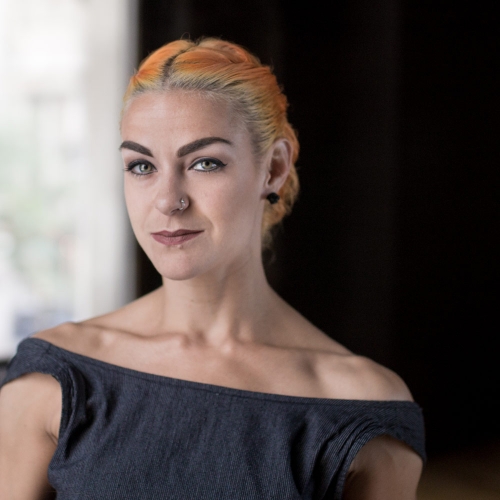 Jessica Daley was born in Philadelphia, PA. She began her training at Jason Douglas Dance and continued at The Rock School of the Pennsylvania Ballet and later the Alvin Ailey School at Fordham University, training under Troy Powell. While earning her B.F.A. at The University of the Arts, Jessica received the Promising Artist Award and the Pulawski Award. She joined the 76ers Dance Team from 2001-2002, participating in the All-Star Basketball games and dancing alongside Will Smith, Justin Timberlake, and Britney Spears. From 2002-2004, she performed with Eleone Dance Theater and upon graduation from UArts, Jessica received the award for Excellence in Modern Performance.

In 2004, Jessica joined Koresh Dance Company led by the brilliant Ronen Koresh and happily made that her home for eleven years. While at Koresh, she performed original works including Robert Battle’s ‘Embattled’ and Paul Selwyn Norton’s ‘Pieces of Nine’. She also performed in Itzik Galili’s ‘Things I Told Nobody’ and, concluding an intense Gaga training with Ohad Narahin, Jessica was selected to perform the duet ‘Passomezzo’. In 2008, she guested with Donald Byrd’s Spectrum Dance Company at the Spoleto International Arts Festival in Italy. As a principle member of KDC, Jessica has performed for audiences in Spain, Israel, Istanbul, South Korea, Guatemala, Mexico, and Belarus. She is proud to be part of the inception of the ‘Come Together Festival’ which now hosts over 33 dance companies, annually in Philadelphia.

Jessica has been featured in Dance Magazine, PhillyMag, and TimeOut NY. Her choreography has been presented at The University of the Arts, Jacksonville University, Belvoir Terrace, BHuman Dance Company in San Jose. Jessica’s collaboration with Cuban musician Francois Zalas and Breaker Vince Johnson resulted in an original ballet featured for the Jazz residency at the Kimmel Center in Philadelphia. Jessica has been hailed as an outstanding teacher and mentor worldwide with credits at universities and festivals nationwide, as well as international residencies in Istanbul, Israel, Spain, South Korea, and Belarus. She has been teaching at UArts since 2015.