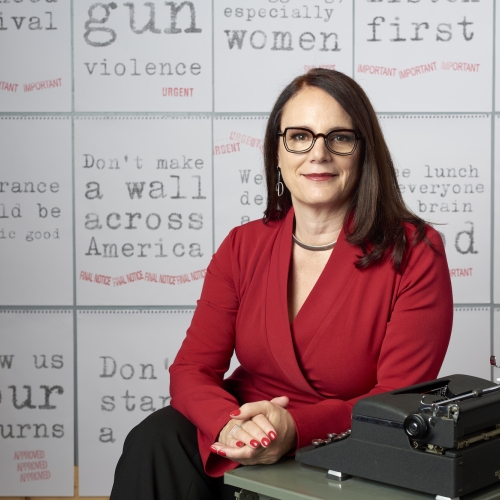 Sheryl Oring, a renowned artist, educator, activist and advocate for the arts, has been named dean of University of the Arts’ School of Art. Oring joins UArts from Detroit’s Wayne State University, where since 2019 she has served as professor and chair of the James Pearson Duffy Department of Art and Art History. She will assume her new role at UArts on January 30.

Through her inclusive and collaborative brand of leadership, Oring will advance the university’s mission while strengthening its international profile as a leading visual and performing arts school and creating new opportunities for UArts’ students and faculty. Additionally, Oring is deeply committed to elevating the profile of the university’s many BIPOC artists and reinforcing a supportive and cross-disciplinary environment that fosters innovative art-making and creative thinking.

“UArts has an extraordinary creative legacy and an ambitious mission, so I could not be more thrilled to join this university community,” Oring said. “As a leader in visual arts education, I draw inspiration from amplifying others’ work and vision, something I am eager to continue at UArts and throughout Philadelphia. I look forward to engaging and collaborating with the many students, faculty and staff who make the university such a diverse hub of creativity and innovation.”

Oring holds an MFA in Visual Art from University of California, San Diego, and a BS in Journalism from University of Colorado, Boulder. At Wayne State, Oring was instrumental in transforming its art instruction by weaving it into the university and the surrounding community’s cultural fabric. Among her many projects, she oversaw the formation of an art and medicine working group that gathered community members, doctors and artists in pursuit of a common goal. What emerged was a mural that celebrates African American contributions to the field of medicine in Detroit. The mural, which was unveiled this fall, was supported by Michigan Humanities.

As an artist, Oring investigates social issues through projects that blend old and new media as a way to tell stories, explore public opinion and invite an open exchange of ideas. Her work has been shown at Bryant Park in New York City, the Berlin Wall Memorial, the Jewish Museum Berlin, the 01SJ Biennial in San Jose and the San Diego Museum of Art, as well as in major festivals such as Encuentro in São Paulo and the Art Prospect Festival in St. Petersburg. Her artist books are in collections, including the Library of Congress, Tate Modern and the Bibliothèque Nationale de Luxembourg. Oring is a Creative Capital grantee and has received support from Franklin Furnace, the New York Foundation for the Arts, the North Carolina Arts Council, the American Council on Germany and numerous additional organizations.

In 2004, Oring began I Wish to Say, through which she has typed nearly 4,300 postcards at dozens of locations across the country and has sent them to four different United States presidents. Across the project’s more than 100 performances, Oring dons 1960s secretary attire and establishes a makeshift office—complete with a vintage manual typewriter—in a public place. Passersby are invited to dictate postcards to the sitting president. After typing them verbatim, Oring sends the original postcards to the White House and keeps a copy for her project archive, hosted by the University of North Carolina at Greensboro Library. Oring maintained a virtual iteration of the project during the COVID-19 pandemic, and in 2016, she was joined by 60 of her students to present a large-scale version in New York’s Bryant Park.

I Wish to Say and Oring’s other work, which is intrinsically connected to writing and the ideals of democracy, will be particularly resonant in Philadelphia, a historic city with a lengthy and impressive artistic legacy. In Philadelphia, Oring will leverage her uncanny ability to uplift unheralded voices through the transformative power of art to forge potent new relationships and ensure student success.

Pictured above, "I Wish to Say" by Sheryl Oring. Portrait of Oring by Dhanraj Emanuel.