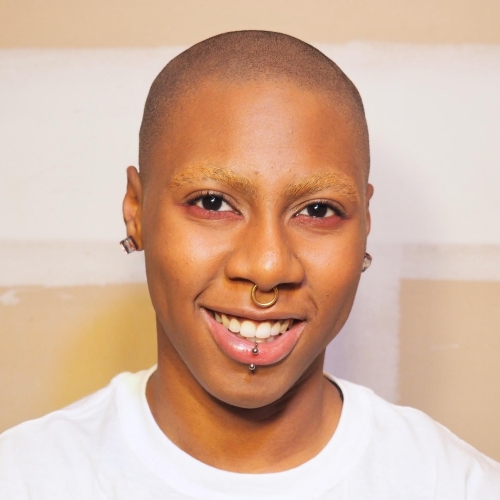 Majesty Royale is a dancer, performance maker, sound explorer, and ghost occupying liminal spaces. Living in geographical and ideological spaces not meant to support bodies like hers; her making is about finding, creating, and traversing through alternative spaces more suited to the expansive truth of human liveness. This is Perseus in Medusa drag: weighted by naming, lightened by largeness. Her work confronts claims of ownership on the body by engaging in radical defiance of how one should be. She employs the methods of flamboyance, language reconstruction, community building, coded language, voice, glitter, and sweat. Through her practices, she intends to loose herself and others of the constraints of a singular reality in search of new realnesses.

Majesty is a graduate of the University of the Arts with a BFA in dance, where she received the President's Award for Excellence in Creative Practice. As a 2020 Pina Bausch Choreography Fellow, Majesty studied alongside choreographers Ryan Kelly & Brennan Gerard, as well as interdisciplinary artist, keyon gaskin. Majesty has performed work with renowned artists in the US and Europe including: Gerard & Kelly, Bouchra Ouizguen, Isabel Lewis, and Jumatatu Poe among others.