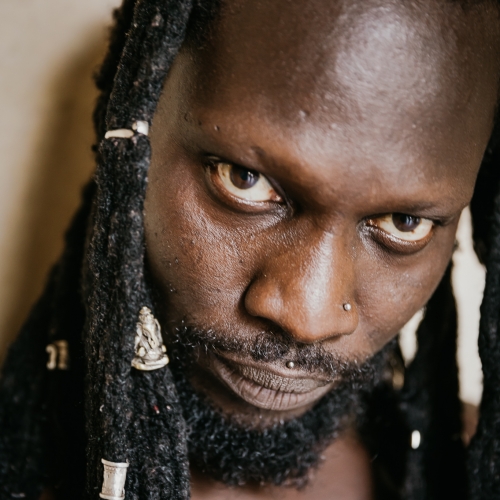 Born and raised in Senegal by his grandmother, Pape Ibrahima Ndiaye, a.k.a. Kaolack, has studied and performed as part of the Jant-bi company at Ecole des Sables, Senegal, from 2000 to 2010. In 2008, he won the Danse l’Afrique Danse Choreographic competition from Africa and the Indian Ocean in Tunisia with his solo J’accuse’ in Tunisia. In 2011, he moved to Czech Republic with an emerging solo practice, teaching experience and rich choreographic skills. In 2014, he started working with Nora Chipaumire on portrait of myself as my father, which opened his mind and furthered his understanding on the aesthetics of the Black body, Black African performing bodies and the radical Black African presence. Over the years, he has acquired experience in performance, choreography and knowledge through his study of the Acogny technique and Nora Chipaumire’s works. From these experiences and inspired by the Senegalese Ndaga, he created his own dance vocabulary and continues to investigate and unpack its potential as a technique. Kaolack’s work is entirely focused on pushing boundaries off space and time, liveness and fully being in the spaces we inhabit and claim as our own, while making space for spirit to be present. It is also about the transmission of embodied knowledge. Our bodily knowledge, the animist information rooted in Indigenous cultural dance practices that are connected to ancestral wisdom. And finally, it is about deconstructing the notion of decolonization by creating images that are mesmerizing and futuristic.