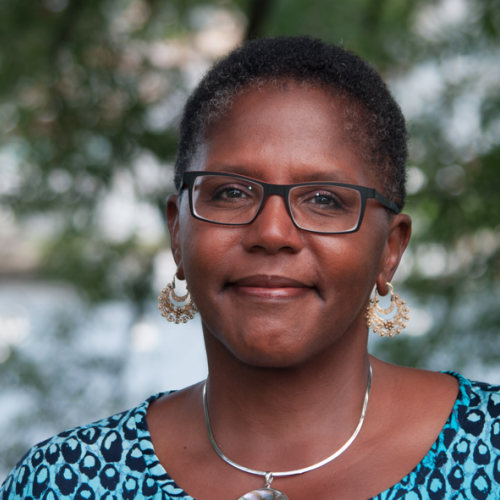 Kym Moore is an innovative and imaginative leader, theater-maker and scholar who continues to demonstrate the interconnected power of creative disciplines to impact and shape our reality. Moore brings a passion and conviction that inspires joy, unity and drive within the artists, makers and creatives fortunate enough to work with her.

Moore served as full professor and director of undergraduate studies in Brown University’s Department of Theatre Arts and Performance Studies, where she has taught for more than a decade. As an educator, theater-maker and producer, she directs, devises and writes works that utilize the unique materials of theater to examine the multiple dimensions of human existence and seek to cultivate a “culture worth living in.” She is the co-founder/co-artistic director of the Antigravity Performance Project, which was founded in 2012 to challenge the boundaries of theatrical convention and forge new frontiers in performance-making. Moore and her collaborators recently completed their second residency at the Yale Center for Collaborative Arts and Media toward the creation of a transmedia performance installation, Do Eye Know You? which they plan to premiere in Philadelphia next season. As a director and producer, Moore has received numerous awards together with her collaborators, including the Salomon Award (Time’s Up!), the Pen and Brush Playwriting Award (The Date) and two Dorry Awards for Best Direction and Production of a Play (The Road Weeps, The Well Runs Dry).

Throughout her career, Moore has taught acting and directing nationally and internationally at Swarthmore College, Hampshire College, SUNY Purchase, Sarah Lawrence College, Notre Dame University, Indiana State University, the Juilliard School, Carnegie Mellon University, the SIBIU International Theater Festival (Romania), and the Belgrade Theatre (UK), among many other organizations. Her course Acting Outside the Box: Considering Race, Class, Gender & Sexuality in Performance has also been taught nationally and internationally, including at the National Theater Institute/Eugene O’Neill Theater Center, NYU Graduate Acting, University of Oklahoma/Norman, Williamstown Theatre Festival, Columbia University and the Juilliard School. Moore is a graduate of the State University of New York New Paltz (BA) and University of Massachusetts Amherst (MFA). She is an associate member of the Society of Stage Directors and Choreographers, and a member of the Lincoln Center Directors Lab and the National Alliance of Acting Teachers.