"Man Down" by Jaymie Hommel Excerpt 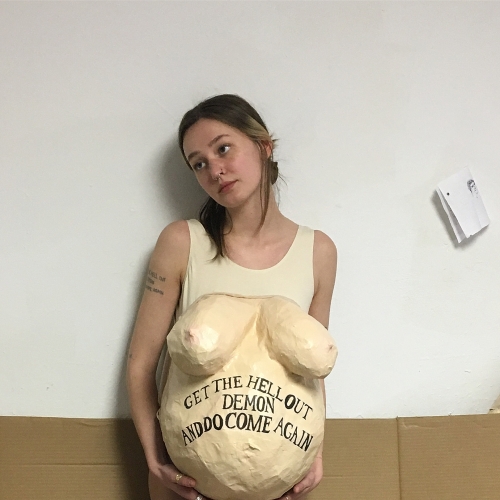 Quote from Writer’s Statement:
“For all of the years I became concentrated on making “good poetry”, I lost the genuine love for
just writing. That’s what Man Down is to me. It is simply just the expression of self in writing. For
many, this collection is about family, addiction, loss, silence, but for me, it is just all of the words
I’ve needed to write.”

Portrait of My Mother

I bend a spoon

the same curve of my dislocated thumb
as I wait for 4-minute microwave rice.
Today, I am the stabbing at the Wawa on Broad.
I am the string of teen thefts that haven’t yet
been caught. I am indigestion from eating too fast.
I am the drunk driver who killed his son
in the backseat. I am the son in the backseat.
I am a California forest fire. The kind that you see on TV
that doesn’t make a sound—that would be too real
for viewers like you at home.
Last night I went to the bar and met a man from Oregon.
He kept touching my leg. He ordered a jack and coke. Tossed
the straw onto the floor. He put his hand up my back, underneath
a pre-pubescent favorite shirt and I couldn’t speak a word.

Once someone falls, we
recognize the silence. To see
the body, something not in
this world.
someone is naked, drunk and I suffer
reality:
undressed, horrified.
Aware enough,
aware we’ve fallen. Expect this sacrifice,
the purest loss.
Say: Because madness is also like death.

my mother’s favorite song is the next one
that comes on the radio that reminds
me of her and I think my girlfriend is catching
on to me, she says “I thought her favorite was Love
Shack by the B-52s” and at 52 this might have been
true for her but now she has an iPhone more elevated
than mine and listens to Shawn Mendez on the days she stays
at home rather than sleep with her boyfriend whose
MS hasn’t stopped him from taking my mom to her first
rock concert one hand on her hip, the other his leg, the nerves
deteriorating faster than her favorite song on the radio stops playing

Thank God They are Catholic
For my grandmother, Betty

Thank god my family is Catholic it helps me
sleep much better at night knowing
they are at least telling someone their secrets
My family is lacking
familiarity it simply just doesn’t exist
through passing moments the horror stories
my mother told us of grandma and her sister eating
liver somewhere I press my mother for more
champagne and she’s drunk
enough only to reveal a picture
thirty years ago, her middle finger
I have been ill not unlike grandma who spends
her life trying still to understand still but then my mother
tells a resident doctor in a nonchalant manner
“grandma tried to kill herself”
offered without a sacrifice
the only time I thought
I should have been a doctor

What did you think was happening?

The end of the world. Nothing
at all. The hallway in-between
a mother and the small breath
of her child sleeping. A rumor
or two found truthful. A rekindling
of feelings already kindled. Many
large and small mistakes. A life
begging to be slipped into and
immediately out of again. Clothes
hanging in the closet waiting
to be worn.

I Do
For my mother, Jan

My mother said two words three times
and the words were I do She says set the table
for us—not your father—and I do Stop picking
on your sister! I say I won’t but I do Teacher says homework
and the homework says I do My mother says just do it for me,
okay? So I do I want to run away
at sixteen and I do The devil on my shoulder
says keep the change so, I do
There are questions I ask only silence
answers when I do She says, forget
about your father and I can’t but I do I keep
saying I want to get better, stop drinking and I do
The guy on the street says
miss do you have a cigarette and I want
to say I don’t
but I do

In All Its Glory

In all its glory across the street a building
reads “demo door—do not enter” And I feel bad
for even looking Looking up at the sky Today caught in the rain walking home
Very beautiful I say Sent a text with evidence I took
Maybe should have taken my mom’s
umbrella Underneath it all I still feel like a child Although
I’m getting fucked in the shower Covered up neck high at night in
comforters in case there is still a monster coming for me I know,
right? I know lots of things, like when the world will end But I can’t tell
anyone or someone might overhear me
I’m over this story Is exhausted like imagination Imagine the rain
not being a burden Like I put these earbuds in not to not hear anything
But so no one would talk to me I talk to myself
mostly They tell me you can be anything you want I don’t think
I needed anyone else to tell me that Tell me about the past (jk)
Scratch that last part I don’t need to be a part of anything But now I
Am being told in a lecture by some girl that all poets should stop
referring to themselves Well here you go, lady This one’s for you !
For you I would have rewritten everything and I’ve never
revised a single thing in my life
Desire has reduced me
to an ornamental ballerina rehearsing swan lake across your chest
Across the country like manifest destiny like manifestation is me like
who even is me like—
Here it is all laid out for you in tiny bits of bigger pieces
The human body no longer just the vessel