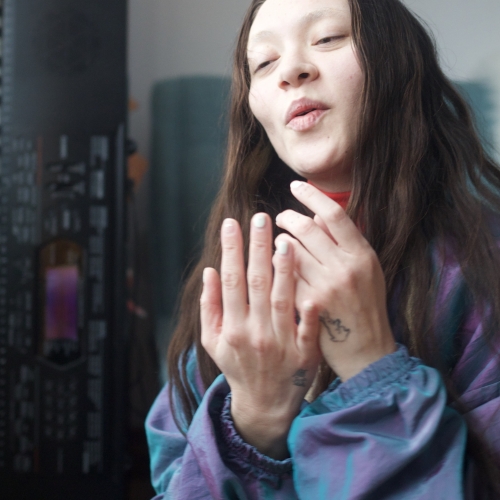 Moving between sound and performance, Be Heintzman Hope is a facilitator of music, dance and embodiment ritual currently based in Tio’tia:ke, most commonly known as Montreal. In 2013, they established Wxmb Cxre, xz a somatic breath, voice and movement practice that centers on the child inside and giving birth to oneself through preverbal gesture. They are co-founder of the Queer Body Workers Network Tio'tia:ke/MTL and have facilitated workshops for organizations such as Sherpa Centre de Recherche, Studio 303, SBC Gallery, Articule, Cinema Politica, and The Center for Gender Advocacy. They are a 3 year artist-in residence at the MAI Theater and have participated in Impulstanz's danceWEB scholarship program. Their choreographic and facilitative work has appeared in music videos, queer post-pornography and science fiction film. Former member of the collaborative duo Psych-Ich Lie, that strung together experimental electronic music, confrontational dance performance, and wrestling tactics - they are currently in the process of developing a solo music project, focusing on a sound that can speak to those in their parents generation as well as their peers.