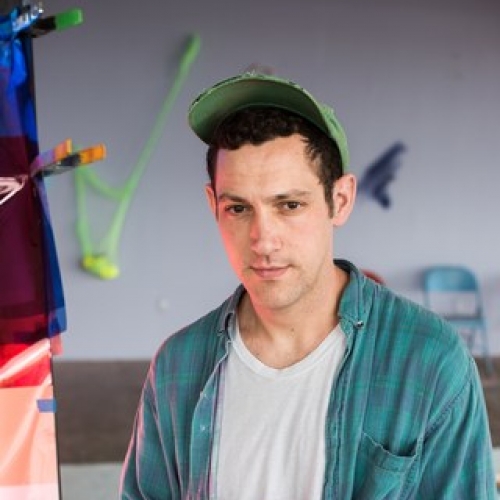 Alex Da Corte’s 'Die Hexe' ('The Witch') is a labor of love...and dazzles at every turn.

Alex Da Corte is widely recognized as a rising star in the art world. His first survey exhibition, Free Roses, was held at MASS MoCA in Massachusetts in 2016, and which The New York Times called "the most ambitious show of his career."

Working as an “anthropologist of the immediate past,” Alex creates sculpture with the colorful artifacts of turn-of-the-21st-century consumer culture. His reworked everyday objects take on an otherworldly quality in his constructed environments, videos and digitally collaged images, or as material, in the case of his shampoo paintings. “I don’t think of sculpture as static, as dead objects," he says. "I think of them as tracing an action. “Sculpture is the unraveling of a familiar object.” His work often involves bright colors and crisp advertising imagery, and cameos by pop-culture figures like a fake version of Eminem played by the artist himself.

Alex's work was also included in the group exhibition "Dreamlands: Immersive Cinema and Art, 1905–2016" at the Whitney Museum of American Art, New York. Past group exhibitions include the Louisiana Museum of Modern Art, Humlebæk, Denmark; the 13th Biennale de Lyon, Lyon, France among many others. In 2012, Da Corte was awarded a Pew Fellowship in the Arts from the Pew Center for Arts & Heritage. In March 2019, Da Corte was included in the 2019 Venice Biennale Artist List (ArtNews).