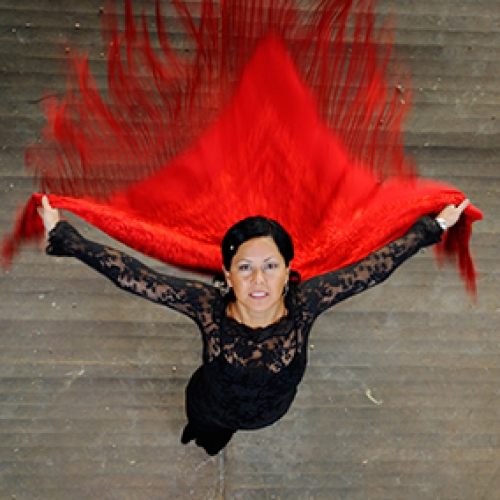 Born in La Paz, Bolivia, Elba Hevia y Vaca began her study of classical Spanish dance at the age of five. She later studied and danced with master dancer Ana Martinez of the Ana Martinez Flamenco Dance Company in D.C., and danced with Washington’s Raquel Peña Spanish Dance Company, appearing as a soloist at various venues throughout the U.S. In Philadelphia she continued her study of modern dance, jazz, and contact improvisation from various Philadelphia artists. In 2000, Hevia y Vaca founded Pasión y Arte out of a strong and intensely personal conviction that highly-stylized traditional Spanish flamenco dance is a perfect vessel to empower women. These values have been reflected in the six original, critically acclaimed works she has created for PyA, and in the numerous grants, fellowships and accolades awarded to Hevia y Vaca and PyA under her direction; most recently the Rocky Awards for outstanding achievement in the greater Philadelphia dance community. She conducts master classes throughout the US, teaches various levels of Flamenco at her Overbrook Studio in West Philadelphia, as well as being and Adjunct at Franklyn & Marshal and Temple Dance Department.