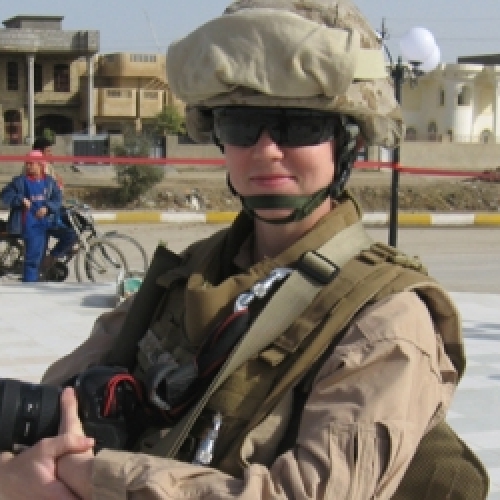 Erin Kirk BFA '06 (Photography) was given her first camera before the age of 10 by her father and has never stopped taking pictures.

After graduating from the University of the Arts, she enlisted in the Marine Corps as a combat photographer, serving in both Iraq and Afghanistan. Armed with her Nikon camera and a rifle and decked out in desert camouflage, Kirk was the only woman in Iraq in the Marine's Combat Camera unit.

After her tour of duty ended in October 2008, she became the personal photographer for the Commandant of the Marine Corps, General James T. Conway, the Corps' highest-ranking officer and a member of the Joint Chiefs of Staff, working at the Pentagon in Washington, D.C., until the end of her enlistment.

Erin's work has been published on many websites and in newspapers and magazines, including Yahoo News, Time magazine, The New York Times, USA Today, The Washington Post, The Chicago Sun Times and the Omaha World Herald.

Through wars, traveling to more than 50 countries, covering powerful world leaders, and yes, even photographing a portrait for a friend, Erin has never forgotten that photography is art and that regardless of the setting, there is beauty, pain, tension and love in human interaction, but you have to capture it.