Sound is a powerful connector: It has the power to bridge space and time to miraculously bring us home. UArts faculty and staff member Raúl Romero is using sound to connect to his own roots, evoke memories and engage with Puerto Rican communities in Philadelphia and Miami this fall.

In February, Romero was awarded a NALAC (National Association of Latino Arts and Cultures) Fund for the Arts Artist Grant and a Velocity Fund Grant to explore the significance of el Coquí, the small iconic frog native to Puerto Rico. The culmination is his new work, Onomonopoetics of a Puerto Rican Landscape, a two-city, interactive sound installation that explores how Puerto Ricans connect back to the island through sound and introduces the soundscape to those who might be unfamiliar with it.

UArts caught up with Romero to see how the project has taken shape and adapted to the new restrictions presented by COVID.

“I have a stationary setup here in Philly,” he explained. “The project started specifically for Philadelphia to be at Taller Puertorriqueño on 5th Street [and Lehigh Avenue], which is called El Centro de Oro.” The soft launch in Philly’s Puerto Rican neighborhood began in mid-September with one sculpture inside the window that audiences could see from the sidewalk. “It’s what I call the base station,” said Romero, “and it’s the main place that is producing the sound.”

Romero chose El Centro de Oro as the site of the Philly installation after having worked there for some time as an advocate for Latinx politics and voter registration, and was inspired by the rich culture he saw. “Everything from the open spaces that are used for gardens and chickens to the mural imagery—there’s this whole connection to Puerto Rico there, and the Caribbean, too.”

After Taller, Romero expanded the exhibition to create a walking experience of the Coquí calls. Along the 5th Street corridor in North Philadelphia, he has placed motion-activated speakers inside a series of sculptural palm trees to engage with passersby. There are “different spots where you can activate the sounds and then stop and have a moment to reflect or think about if it evokes any kind of memory or connection,” he said. 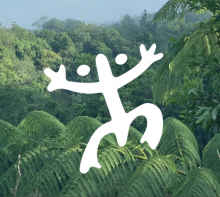 Romero’s first real engagement with the Coquí was at age 9 or 10 when he lived with his family in Arecibo, Puerto Rico, for a summer. “This sound is something that you experience there but it’s also something that can travel, and what travels with that is also the culture.” Romero explained the historical folklore surrounding the Coquí, specifically, how the name is a Taíno onomatopoeia—a word created by the indigenous people of Puerto Rico which mimics the frog’s distinct call. The Taínos also left behind petroglyphs, rock carvings found throughout the Caribbean, a symbol of the frog’s significance. “There are many Taíno symbols in murals up and down 5th Street,” Romero noted. “You’ll see [them] representing many different things, from turtles and frogs to people and gods. There’s a symbol that’s very specific to the Coquí, and you’ll see that a lot as an iconic image that represents Puerto Rican culture.”

Romero has created a vessel for the Coquí calls by constructing stationary satellite sculptures out of copper, steel, wood and other natural materials. He recalled a childhood fascination with astronauts and a family field trip as his inspiration. “One time, my grandparents brought me to the [Arecibo] Radio Observatory,” he said. “That was a huge influence—seeing this magnificent structure that’s listening to outer space. I think it’s one of those things that I’ve carried with me forever.”

The Miami version of the installation is anything but stationary, and has pivoted from an indoor exhibit at Locust Projects, Miami’s longest running alternative art space, to a traveling sound sculpture. “What’s in Miami is like a cargo trike,” said Romero. “The tricycle was taken apart, boxed up and shipped down there,” where it was reassembled. “Considering COVID, I thought it would be better to actually activate and bring the [experience] out to the community for more of an exchange,” he explained. Adapting to Locust’s Art on the Move program—an ongoing public commissions initiative—Romero was able to access funding to hire artists and performers to take the trike to various events and locations throughout the fall, for spontaneous trips and by request.

Though it’s still in the early stages of activation, Romero hopes the trike will stir some curiosity in Miami. “It’s still an improvisation as far as where [it] will go,” he said. The maiden voyage of the trike was a groundbreaking ceremony for the Puerto Rican Chamber of Commerce, which was well received. The Coquí trike also took a spin through Wynnwood and the Miami Design District, where Locust Projects’ galleries are located, and where there was once “a pretty strong, concentrated Puerto Rican neighborhood. So that’s kind of a coincidence,” said Romero.

Another challenge Romero is facing during the pandemic is audience engagement. His original plan was to have “audio ecologists” interview people to collect stories, but decided against person-to-person interaction for safety reasons. Instead, Romero has created a website where he will publish and archive those stories for others to listen to. Using QR codes at listening locations, participants can share their stories about their connection to the Coquí completely online. “Getting a call to action to go all the way and cycle through is pretty hard to do online,” he said. “I think online, it’s easier to consume. But having a two-way form of communication is pretty difficult.”

The installation also coincides with this year’s pivotal election season. Romero is not currently involved in any official capacity within the Puerto Rican community in terms of political activism and voter registration, but he thinks engaging with the community through art provides another point of departure to have those conversations. “When I wrote my proposal for Miami,” he said, “I thought specifically about the timing of a show in fall 2020 and its potential for conversations around identifying with people’s homes, specifically immigrant families in the U.S. I also think about the metaphor of this very small frog and a very small island, but the sound of the frog is very loud. I kind of equate that to our voices—how loud our voices can be and the desire to be heard.”

Onomonopoetics of a Puerto Rican Landscape is on view in Philadelphia until January 10, 2020. Free visitor parking is available at the rear of the new Taller Puertorriqueño building at 2600 N. 5th Street. Please be sure to maintain social distance and wear a mask when viewing the installation.