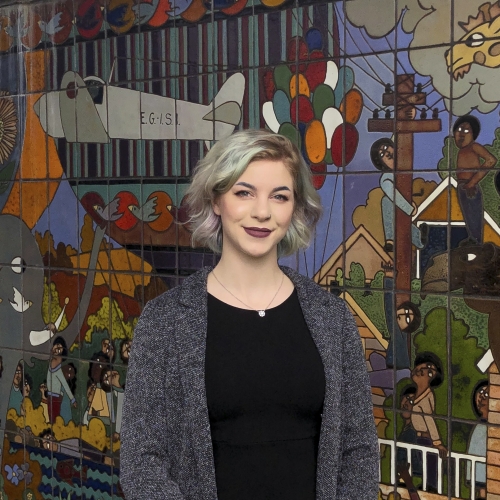 My name is Danielle Vuono and I earned my BFA in Game Art at the University of the Arts. I began college at Maryland Institute College of Art for animation, then transferred to Alberta College of Art and Design in Canada for illustration. Finally, I decided to return to my roots in Philadelphia and transfer to UArts. Originally I attended for illustration, but after a semester I changed my major to Game Art to fulfill my need to create a more interactive and personal experience with my art. Before attending the UArts, I interned at Fifteen Pound Pink Productions creating special effects for a National Film Board of Canada short film called Skin for Skin.

Once I changed my major to Game Art, I heard about a community called Philly Game Mechanics. Philly Game Mechanics is a community full of game developers, writers, artists and musicians who all share a love for games and making them. I attended game jams and events and made a bunch of friends and connections which led me to Gossamer Games, where I worked as a lead artist for the game Sole. I think it is safe to say meeting my boss Tom Sharpe was one of the most important moments of my young adult life and my career as a game artist. I got an interview with Tom and almost immediately started working on Sole. Working for Gossamer Games changed my life dramatically. I never thought I would be a part of such an amazing team of people and be nominated for best student game at the Independent Games Festival 2019 where well-known games such as Night in the Woods and Celeste have been recognized.

Since working at Gossamer Games, I got to attend MAGFest twice, showcased on the IMAX screen at the Franklin Institute and attended PAX East in Boston as well as the Game Developers Conference in San Francisco. I have learned an enormous amount through all these events and built a community to turn to for support with my own art endeavors. I could not be more thankful.

After Gossamer Games, I was an art generalist for Pixeldust Studios. Currently, I work as a 3-D artist on the most popular game on Roblox, Adopt Me! I also freelance for Night School Studio on the side.