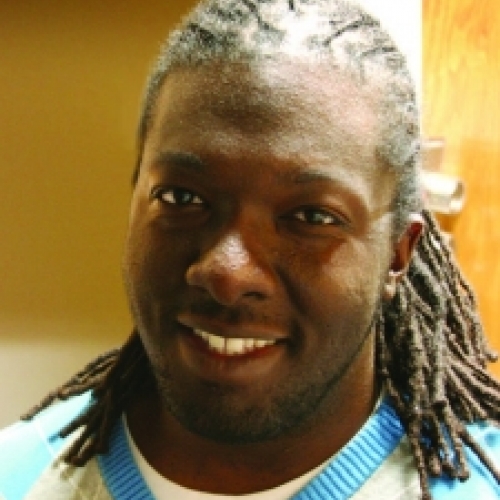 Inspiration is personal for Sharif Pendleton BFA '06 (Multimedia). A phrase coined in conversation with a friend triggers an edgy collection of stationery and jewelry. The contents of his own closet, seen anew, suggest preppy patterning for hipster tabletops.

As the founder of Masters of None, Pendleton stays true to his tagline: making "the provocative, the funny and the cool" in the form of housewares and accessories. His creations range from notecards engraved with a warning ("Emotions can be dangerous") to argyle-patterned bamboo coasters inspired by the sweaters in his own wardrobe.

"I'm well aware of the fact that I didn't invent coasters, but I do think I make them a little bit cooler," quips Pendleton, whose current products also include mirrors, cuff links, pendants, ornaments and table tiles.

With its tongue-in-cheek name, Masters of None puts Pendleton's commitment to creative freedom front and center, referencing the age-old saying "Jack of all trades, master of none, though often­times better than master of one." The moniker allows Pendleton to go where his inspiration takes him. "I'm just uncomfortable sticking with one type of media," he says.

Pendleton established Masters of None after the economic downturn changed his plans in 2008. Laid off from a position as a multimedia specialist at a law firm, he sought to maintain the flexibility he enjoyed in that role by starting his own business.

Now, Pendleton's bold move is paying off. His creations have created a buzz in Good Housekeeping, Philadelphia Magazine, DailyCandy, Thrillist, Netherlands-based Linda magazine and other media outlets, and they appeared in the gift shop of the Philadelphia Museum of Art.

While his approach lets his imagination roam, it also requires precision and discipline. "It takes a lot of science to make it look like a lot of art," says Pendleton, who works with an industrial laser cutter at West Philadelphia's NextFab studio. New to laser cutting when he launched Masters of None nearly three years ago, Pendleton now uses it to produce most of his products.

He credits the UArts Multimedia department with preparing him for the challenges of new creative horizons. While it offers a vast array of options, he says, the program also pushes students to make sure their core ideas are sound. "Your concepts have to be very, very strong," he notes.

At the heart of Pendleton's aesthetic is the principle "form follows function," which he first learned in the classroom of former UArts Assistant Multimedia Professor K. Lynne Koval-Bauer. "I remember it sort of being a mind bender at the time," Pendleton says. Today he points to its impact across his work and particularly in his line of felt table tiles.

Pendleton chose the shape of the tiles – houndstooth – to provide multiple functions. Users can assemble the tiles into trivets, placemats and table runners. "I also like the idea of giving people who are not designers the opportunity to bring art and design to their everyday life," he says.

For Pendleton, the most rewarding part of his work is knowing that other people have a use for his creations. "When you make products, it really starts to feel like they belong in other people’s homes," he says. "When they accept that and they accept you, it's a really great feeling."