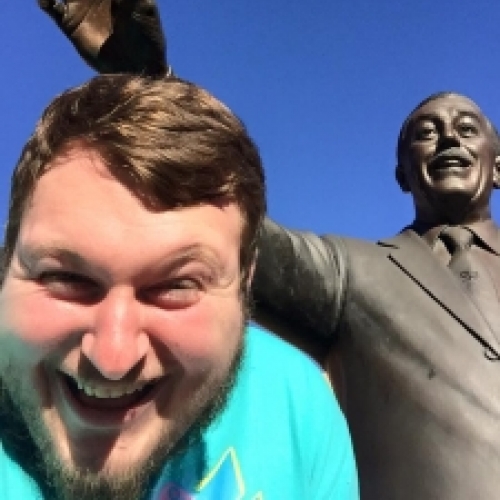 Animation (BFA)
One of the big things that prepared me for working at Disney was collaboration and working in a team. 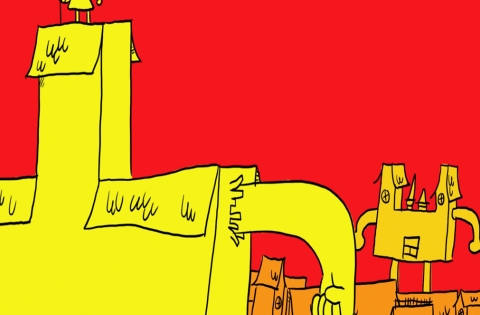 Watch the video: Witches of the West, Senior thesis animation

CHOOSING A SCHOOL TO STUDY ANIMATION
Q: First of all, why study animation? Did you consider illustration, comics, graphic design or film/video?

A: In middle school, I remember seeing a picture of a bunch of stills of Futurama, there were so many frames of drawings just to get him to move his finger. At that time, seventh grade Drew dismissed it, I never wanted to animate, it seemed way too much work! But then I discovered an online community of animators, one specific stop motion/cgi animator named “MDotStrange,” who preached that anyone can animate and that it was getting more and more accessible every year. I really started looking up to these guys and they inspired me that not only was animation possible to accomplish and do on your own, but it was fun and rewarding. From then on, I always wanted to do animation, throughout high school I learned more about it, followed more animators online and just kinda soaked it in. At one point, yes, I was torn between illustration and my comics and animation and what to study in college, but at the end of the day it come down to the fact that I already had an alright basis of illustration but next to no actual experience in animation. So thus the decision was made.

Q: What were you thinking about when looking at animation schools? Where did you look? What made you select UArts?

A: When looking for colleges to apply to, the main thing I wanted to focus on was community. I wanted to be among artists and be able to collaborate and learn from everyone in an artist-based community. Of course there was SVA and CalArts that had been shoved at me since the beginning with their popularity and their school-to-job ratio but...they didn't accept me haha. I had a history with UArts with Saturday classes and portfolio reviews, I knew UArts and I’m happy they were the school to accept me. Our senior class had such an amazing variety of animated pieces that would never be seen anywhere else. UArts gives everyone a chance and if you apply yourself and really try to get the most out of the program, you can become an amazing artist with your own style and feel. 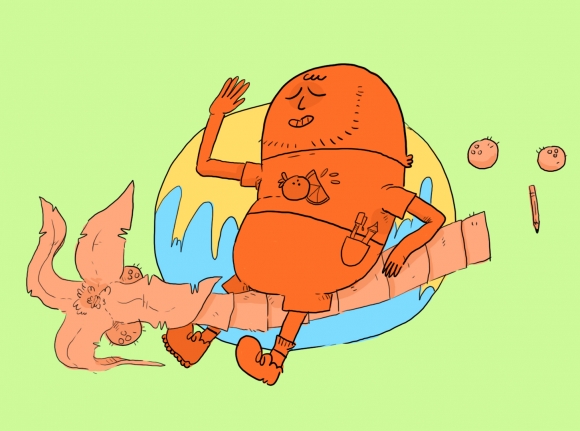 Q: Did you have an opinion about Philly at all before? How did the school’s location in Center City affect your decision to attend?

A: I started taking Saturday School classes at UArts before I was accepted there. It was the only real experience I had of Center City and of Philadelphia, but from driving there every Saturday and after class exploration, I knew it was a great area. This was amplified by a million when, the summer before I went to UArts, me and some friends took day trips to Philly and just explored around the city. I think the location of UArts is unbeatable and Philadelphia as a city is amazing and great. It’s beautiful and full of life without being confusing. And even through it has a straightforward street layout, you still always seem to find a new cool thing each time you go out exploring.

EXPERIENCES DURING SCHOOL
Q: Can you describe what you valued during your time at UArts that prepared you for the job that you got at Disney?

A: One of the big things that prepared me for working at Disney was collaboration and working in a team. I can’t tell you how valuable it is to me that I’m used to talking ideas out and knowing when to step back to let others have their own chance to put in ideas. Another factor that has helped me is just being personable, being able to take critique and just being open to conversation and discussion. While I did get some of this from the Animation program, a big thing that prepared me for these things was the RA Program. Team building and leading a group while being someone people can talk to and discuss their problems with was an experience that won’t be forgotten. Now of course the storyboarding skills I learned during the Animation program were invaluable and the crits and reviews I had helped me a ton as well.

Q: Can you talk about the community of peers and/or instructors that you encountered at UArts if they were notable in any way?

A: The friends and teachers (whom some became friends) I met at UArts were invaluable to my growth as a person and as an animator and creator. My Animation year was so supportive of one another and was a super tight-knit group. Even if you weren't a super close friend with someone, you still could depend on them and they knew they could depend on you. Not only that, but the year above us and even the year above that helped us out every step of the way and still does. Meeting you, Chris McDonnell, in my junior year was a big jump and growth for me. Chris was an amazing teacher who knew what it was like to be in the animation industry and was chill and supportive enough to pass all that information on in a great way. It was my first time going back to digital animation after working traditional for a year or so and suddenly everything made sense, everything connected and everything was so accessible. So not only did he teach me skills I still use today, but his support and attitude helped me a long way with wanting to continue to work towards my goal as an animator in the industry. Then of course I met Elliot Cowan, the man who really kicked my ass and got me going. He taught me storyboarding, how to handle animatics and many, many other things in between. Elliot was one of the most supportive teachers at UArts and without him, I wouldn't be where I am today. His crits made sense, his philosophy on animation and how to work toward what you want to accomplish really stuck with me. 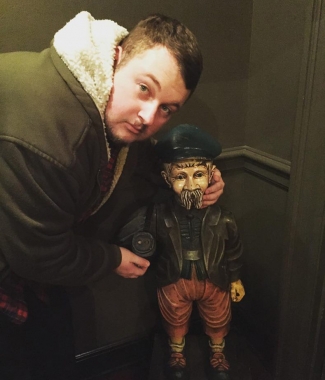 AFTER GRADUATION
Q: Was there support or direction for graduates of the program? Did you and peers know what to do next?

A: I know there is an alumni program but I never made use of it, but through different events the animation department held like the Nickelodeon event, visiting studios in New York City and facilitating trips to the Ottawa Film Festival, there was plenty of opportunities to see what is next and start preparing yourself for it. Elliot Cowan gave us multiple talks about the future and the direction we should head as well and just what to expect.

Q: How did you end up in California and can you describe the process of landing your job? Who did you talk to, were you recruited or did you apply, etc.

A: Moving to California after I graduated just felt like the next step that I at least had to give a shot. Me and my roommate had talked about it for a while and decided that after a summer of getting up as much money as we could, we would take the chance. From what I had gathered from multiple sources, California was the place to try if you wanted to get into the animation industry. With so many big studios having their main production there it was the best place to make the gamble and go for a job. In my mind, too, I felt like I had the least to lose at that point in my life and it was the perfect time to take that chance. If I failed, I could come back home, make a bit more money and maybe try a different approach. I felt, too, that since the next biggest place to try to make it would be New York, if I had to come home, then New York wouldn't be far away. As for getting the job, someone I know introduced me to a talent development director at Disney and we talked a bit and she sent my stuff through the studio and Aaron Springer, creator of the show I’m working on now, Billy Dilley’s Super Duper Subterranean Summer, got interested in my work and I was sent a storyboarding test. I completed the test and was hired the following week.

WHAT YOU’RE WORKING ON NOW
Q: Can you describe your job now, your day-to-day responsibilities?

A: My job now is a storyboard artist, and what that entails is working together with a partner to board out, on a program called Storyboard Pro, a full 11-minute episode of Billy Dilley. We basically go in a month cycle. We are given the outline of the episode on a Monday and we discuss it and get the full feel for it, me and my partner then usually split up the scenes between ourselves and decide who is going to board which parts. How you divide it up is all personal preference and what you feel gets the job done best for you. So we usually have around two work weeks to complete the full rough version of the board. We get the outline Monday and have to pitch it to the staff heads on the following Friday. After you pitch the board, you discuss it again, figure out what's working and what doesn't and then you take those notes and edit the board accordingly. This goes on for a few more pitches until the final pitch to the whole crew and the head executives of the show. This is the biggest pitch and is usually at the end of week five of the episode. You get notes back after this pass too, but this changes from show to show, some artists just move on to the next episode or something else but we take care of a few more revisions until the following Monday the process repeats again. But on a day-to-day basis, you just have to make sure the work gets done on time, you are there for meetings and getting notes and you are in constant communication with your board partner to figure out the best way to make the board one big cohesive piece.