Attracting national and international artists to our campus, this is the University’s primary exhibition space.

The Rosenwald-Wolf Gallery is the main gallery of the University of the Arts, located six blocks south of City Hall, across from the Kimmel Center. The gallery is free and open to the public. Noted projects of the Rosenwald-Wolf Gallery include "Yvonne Rainer: Radical Juxtapositions 1961 – 2002" and "Seductive Subversion: Women and Pop Art 1958 – 1968,"—both supported by The Pew Center for Arts & Heritage—which have won AICA Awards and been reviewed in major publications such as The New York Times, Boston Globe, The Philadelphia Inquirer, Artforum, Art in America, Artnews, Art History and Burlington Magazine, among others. Rosenwald-Wolf Gallery's current show, "Invisible City: Philadelphia and the Vernacular Avant-garde" is was six years in the making and is also supported by The Pew Center for Arts & Heritage.

University of the Arts / Rosenwald–Wolf Gallery

Invisible City: Philadelphia and the Vernacular Avant-garde highlights Philadelphia’s significant contributions to visual, literary, and musical culture between 1956 and 1976. An interdisciplinary exploration that is centered at University of the Arts across three venues––Rosenwald–Wolf Gallery, the Philadelphia Art Alliance, and Gershman Hall––as well as the Pennsylvania Academy of the Fine Arts, the project invites audiences to envision Philadelphia as “a city of firsts,” whose accomplishments include the first Pop Art exhibitions, innovations in architecture and urban planning, the country’s first rock music and The Philly Sound, and a substantial post-war growth of art schools.

We invite you to join us in celebrating this city and the legacy of its creative practitioners as you explore the works in Invisible City. The exhibition is organized by University of the Arts and curated by Sid Sachs, Chief Curator and Director of Exhibitions at University of the Arts with Jennie Hirsh, Assistant Curator, Professor of Modern and Contemporary Art at MICA. Support for the research, development, and presentation of Invisible City has been provided by The Pew Center for Arts & Heritage.

Support for Invisible City has been provided by The Pew Center for Arts & Heritage. 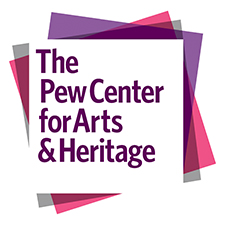